Review of Things on Which I've Stumbled by Peter Cole 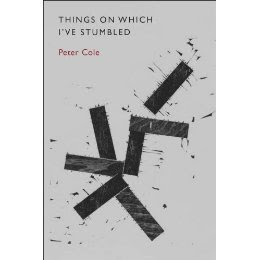 Here's the beginning to my review of Things on which I’ve Stumbled, by Peter Cole, which appeared at Gently Read Literature; I've since sent it to Cole, and we've struck up a good conversation:

The cover image of poet, translator and publisher Peter Cole’s third volume of verse, Things On Which I’ve Stumbled, a woodcut by Joel Shapiro entitled “5748,” anticipates the central poetic concerns of this erudite, politically charged, and often dazzling collection. “5748,” of course, refers to the Jewish calendar year (September 1987-1988) which commemorated the fortieth anniversary of the founding of the state of Israel, as well as the advent of the First Palestinian Intifada—the popular uprising against military occupation in the West Bank and Gaza Strip. The woodcut itself, in its concatenation of blocky rectangles, evokes (at least to these eyes) both a broken swastika and a person mid-stumble. Such is the bifocality of Cole’s project—it is at once a dilatory celebration of the rich mystical and sensual traditions of Jewish life—which has survived despite a history of oppression and marginalization—and an unsparing look at the politics of Israel/Palestine. In this way, Cole’s work offers us nothing less than a poetics of coexistence, in a time when a future of coexistence seems more distant than ever, and never more necessary.

Cole’s Things announces the valor of human stumbling—both “stumbling upon” things (in the title poem’s discovery of an 11th century genizah, a repository of supposedly worthless Hebrew poems and documents) and “stumbling over” the real, that which cannot be denied—whether the political realities of Israel/Palestine or the existential realities of human mortality. In an end note, Cole quotes from Bahir: “When a person accustoms himself to studying the Mystery of Creation…it is impossible that he not stumble. It is therefore written (Isaiah 3:6), ‘Let these ruins be under your hand’ [or ‘This stumbling block is under your hand’]. This refers to things that a person cannot grasp unless they cause him to stumble.”...

to read more, the link is here.
Posted by Philip Metres at 7:52 AM