Mahmoud Darwish and the Reproduction of Poetry/Two Articles

The following are two articles that demonstrate the reverberating legacy of Mahmoud Darwish, and how his poetry has come to take its place not only in the thoughts and voices of Palestinians, but also in handmade sculptures and on walls.

In the first article, a reminiscence by Naomi Shihab Nye, she recalls her relationship to his work. She recounts the incident in which a poem of his held by a child is misidentified as the child's. In Darwish's words, when he heard that a poem of his was attributed to a child, "Don't correct it," he said. "It is the goal of my life to write poems that are claimed by children."

In the second piece, artist Josh Berer writes about using a Darwish poem as graffiti on the separation wall built by Israel. We sense from these stories not only his power as a writer, but the restlessness induced by such writing, that it makes its readers want to make, want to enter those words back into their worlds. Isn't that what great writing does?

The first article is reprinted from the following source, in "Rethinking Schools" 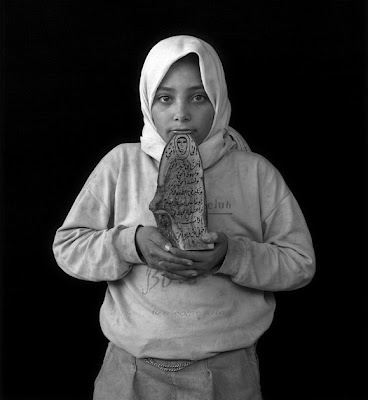 When I included the poem "The Prison Cell" in my first anthology of poems for young readers, This Same Sky (Four Winds Press, Macmillan, 1992), I had not yet met the poet Mahmoud Darwish, but had been reading his poems in English translation since I was a teenager. It would surprise me, in years following the appearance of my first anthology, how many U.S. teachers (in high schools particularly, but also middle schools) would ask me to read this particular poem out loud during my presentations. Somehow, Darwish's simple, strong poem "The Prison Cell" had the power to encourage people to sit up straighter, take note — and discuss or contemplate issues of injustice, as they recognized them. Latino students in Santa Fe, for instance, seemed profoundly moved by the poem and the possibilities of reclamation and enduring power it suggests.

Darwish, beloved as the beacon-voice of Palestinians scattered around the globe, had an uncanny ability to create unforgettable, richly descriptive poems, songs of homesick longing which resonate with displaced people everywhere.

It would have stunned me to imagine that I would stand next to him on stage, along with the poet Carolyn Forche, reading his poems in English after he read them in Arabic at an event some years ago at Swarthmore College, when he received the Cultural Freedom Award given by the Lannan Foundation. He spoke English well enough to have read his own translations, but did not want to.

It would have stunned me even more that he would die prematurely in August of 2008, at the age of 67, after heart surgery, in a Houston hospital in my own adopted state. I had awakened the day he was put on life support, feeling intensely that someone very precious was getting ready to pass out of the world. I nervously mentioned this to my husband a full day before we learned it was true. Perhaps someone very precious is getting ready to pass out of this world every minute.

Now we are left to encourage one another to read Darwish, and to believe in the quest for justice, which he, and so many other homesick Palestinians, never abandoned.

A little Darwish tale worth telling: My husband, photographer Michael Nye, once photographed in a West Bank Palestinian refugee camp for days, and was followed around by a little girl who wanted him to photograph her. Finally, he did — and she held up a stone with a poem etched into it. (This picture appears on the cover of my collection of poems, 19 Varieties of Gazelle — Poems of the Middle East.) Through a translator, Michael understood that the poem was "her poem" — that's what she called it. We urged my dad to translate the verse, which sounded vaguely familiar, but without checking roundly enough, we quoted the translation on the book flap and said she had written the verse. Quickly, angry scholars wrote to me pointing out that the verse was from a famous Darwish poem. I felt terrible.

I was meeting him for the first and last time the next week. Handing over the copy of the book sheepishly, I said, "Please forgive our mistake. If this book ever gets reprinted, I promise we will give the proper credit for the verse." He stared closely at the picture. Tears ran down his cheeks. "Don't correct it," he said. "It is the goal of my life to write poems that are claimed by children."

Palestinian-American Naomi Shihab Nye grew up in Ramallah (then in Jordan), the Old City of Jerusalem, and San Antonio, Tex. She is the author of numerous books of poetry. In 1988 she received The Academy of American Poets' Lavan Award, selected by W. S. Merwin. She lives in San Antonio.


This second piece is from the blog "Nomad Out of Time," written by Josh Berer:

Mahmoud Darwish and the Barrier
About a week ago Rachael and I went back to the Qalandia checkpoint, the checkpoint separating Jerusalem and Ramallah. The Palestinian side of the barrier is covered with graffiti as far as one can see, and so we thought we’d add something to it. Most of the graffiti is the most cliche, boring crap you would expect: “This wall will fall!” “Frei Palestina!” “Miener Schlieben Mit Gevünktenlinmustrassers Berlin!” and so on. I wanted to put something up that had no relationship to the wall, the situation, occupation, Berlin, South Africa or anything else. I chose a piece of poetry by Mahmoud Darwish (which was the most political aspect of the whole project, given he’s the Palestinian poet laureate) and some stencils for a background. I also chose not to put an English translation anywhere. The poem I chose reads:


“The poem drifts away from me
It enters a port of sailors who love wine,
And never return to the same woman twice,
And feel nostalgia for nothing,
Nor sorrow, either.”

At the blog piece, you'll find his pictures of making this graffiti; here's the final product: 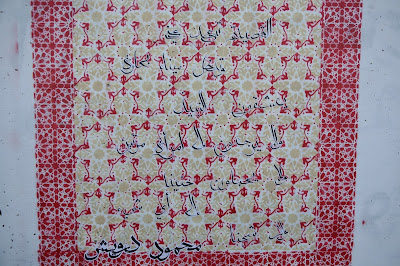