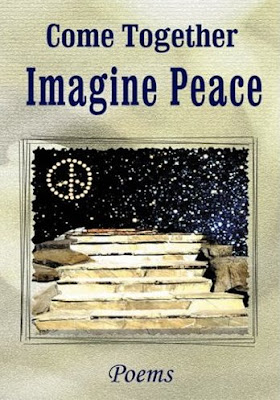 Poets from Cleveland savor the release of a new anthology – “Come Together: Imagine Peace”. On Friday March 20, 2009, local performers will read new poetry, focused on peace, at The Lit: Cleveland's Literary Center, located at 2570 Superior Avenue on Cleveland’s near east side.

Phil Metres, an associate professor at John Carroll University, is one of the featured artists in the book. A number of other local artists will join him for the celebration of new poems. Metres says, “A visionary aspect of the peace movement, war resistance poems valorize the struggle inherent in resistance“.

This poetry “argues against the mythologies of pro-war discourse so that, when the next wars come, people will resist the manufacture of public consent.” Contributors reflect … a range of …. “This is a fight worth writing for, and the lines made and broken are part of ‘millions of intricate moves,’ whose sentence might end with the word peace.”

Proceeds from the event will benefit the 2009 Cleveland Peace Show. On Labor Day, September 7, thousands of people will gather at Willard Park to illustrate that “nonviolence works – war doesn’t”. The holiday event is sponsored each year by the Cleveland Nonviolence Network and Artists for Peace.

The Lit promotes writers and their work throughout Northern Ohio. It is dedicated to literary arts and fosters a thriving community of artists. The center has its roots steeped in the 3 P’s: Poetry, Performance, and Politics. For thirty-two years, it has served as Ohio’s only independent, non-profit literary organization.

Artists for Peace is a loose collective of musicians, dancers, poets, actors, painters, sculptors, multi-media artists and others who believe that art plays an integral part in creating a more peaceful world. Members of the group donate their time, their craft, and their skills to Cleveland-area events and projects that work towards peace.

Cleveland Nonviolence Network wants to support groups in Cleveland working for peace, and to help more people understand how effective nonviolence is.

Contact:
Phil Metres
pmetres@jcu.edu
Posted by Philip Metres at 9:51 AM