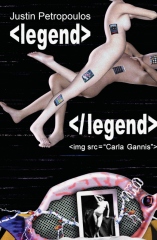 A mutual friend once joked that Justin Petropoulos would one day write a memoir in which he never appeared.  That’s precisely the aesthetic that guides his poetry and the vision that it encompasses; reading Petropoulos is like reading the rebellious child of language poetry and dystopian fiction—it’s militantly forbidding at first glance, but intriguingly quotable once one settles into its chaotic disjunctive music.

His second book, legend legend, (Jaded Ibis, 2013)—a collaboration with artist Carla Gannis—emerges from a series of redactions of Edna Kenton’s The Book of Earths, a 1928 compendium of various global written and visual imagings of our planet.  It has since morphed into a series of art engagements (digital and performance-based, including digital paintings, animations, projection mapped & 3D printed sculptures) which have extended the project beyond the space-time constraints of the book. (Check out their web presence if you’d like to co-create, for example, by redaction techniques.)

The very title--(which, when typed with its precise html coding, actually disappears itself, a problem I discovered after posting this piece the first time!)--is suggestive of the source text’s double-meaning: it is at once a textual supplement or a key to a map and a kind of fabled story that speaks to a particular time and place.  But in truth, in the redactive engagement with this text and its various mappings, this is an anti-cartographic project.  It attempts to unwrite the various creation stories and foundational myths that have begun to ossify and control, rather than merely attempt to explain, the way things are as they are.  Apparently, the project’s title is an empty html tag, which requires us as readers to fill in the blanks.  It reminds me somehow of R.E.M.’s lyrics in their revisionary “Cuyahoga”: “let’s put our heads together/and start a new country up/our father’s father’s father’s tribe/ erased the parts they didn’t like/ let’s try to fill it in.”

From the very opening lines, we have the sense of bodies navigating cities, bodies against themselves, against others: “they walk their feet against/ours speak with likelihood/are your heels higher than /your head we admire hanging/orchards the philosophers’/cities suppose a citizenry/digging with a spoon” (15).  The corresponding image suggests the contortions that such urban geographies impose upon the body.  The final line, “digging with a spoon,” evokes the absurd situation of these subject-bodies.  It’s suggestive of fruitless labor, and also echoes the classic prisoner’s attempt to escape from a life sentence.

The entire work is pressurized by this sense of the oppressive architectures of late capitalist life.  But the vision of this book is not suffocatingly dystopic—or rather, it is dystopic in the way that dystopias tend to be beset with fissures, sites of release, apocalypse.  “When the world becomes bad,” it states at one point, “make it over again” (23).  The book—itself a recycling of books—is interested in making a new world from the remnants of the old.  The wreckage of old maps and myths, if plumbed and recombined, could produce the space for the new.

Petropoulos’ language, embracing the antinarrativity of much language poetry, has that constitutive element of drawing into focus or clarity and then departing again, the way radio stations come in and out of signal as one passes by cities—if one were in a supersonic jet.  The danger for the reviewer is not to suggest overly obvious meanings of individual lines merely explain themselves, when the wholeness of the text embraces a kind of chaos beyond any simplistic utterances of single phrases.  “Meaning,” the text warns, “is what/we wither into” (114).

The book is not illustrated exactly, but re-imaged by Gannis, the way Petropoulos redacts The Book of Earths.  Her drawings are replete with bodies penetrating and penetrated by themselves, as if imprisoned by the bodies’ tentacular longings and imprisonments, the machinery of desire that gives birth to cities and digital virtualities and endless mirrors.  But amid the postapocalyptic visions, both textual and visual, something else is possible, nascent, growing.

In those pauses is a positing of the possible.
Posted by Philip Metres at 5:48 PM No comments: