Lauren Rusk's "The People Who Pass By"/from the Come Together: Imagine Peace series 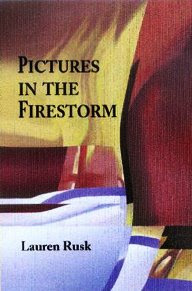 This is a poem from Come Together: Imagine Peace.


They flow around us, our vigil a stone
in their stream, where High and Cornmarket
meet under an ancient clock.

One by one, we mostly can’t be heard
protesting the first day of war
against Iraq. It’s six PM, the light

lasting longer. Speakers’ heads like horses’
shy away from the microphone.
I lean in to hear them say, we must

not kill. Students in turbans, gauze
tunics wafting, lean in too,
as each quarter hour drowns

a voice. Mechanical soldiers, Romans
freshly painted, hammer out the time.
And teenagers crouch on a doorstep, strumming

as if this were a festival. The river of people
surges on, accustomed to vigils, guitars,
mallets, and bells. What are they all doing

that’s so important? Eating a bap.
Swinging a bag of fuchsia tissue paper
from the Oasis, some boutique.

Pulling a trolley of odds and ends,
perhaps to give the Oxfam shop. Or there,
leaning against the wall of that bakery,

breathing in. Shifting a headscarf, to cover
an errant tendril, or tilting a daughter’s
pram up and over the curb;

apologizing, laughing, getting along;
quenching, lifting us, tumbling our edges,
the source, the wellspring, our unvoiced song.

Poet's Comment
When we were in Oxford during the spring of 2003, I and my husband joined the great march in London of people hoping to forestall war against Iraq. There actually seemed to be hope--as we rounded a corner and saw nothing but a vast sea of protestors stretching out in either direction--that Prime Minister Blair would be moved, and that if he backed out, President Bush could no longer pretend to have a coalition. Sadly, they both ignored the will of people in cities all over the world. My poem “The People Who Pass By” takes place thereafter, at a vigil in Oxford, when the bombing was just beginning.
Posted by Philip Metres at 9:35 AM