"Those Policemen Are Sleeping" by D.H. Melhem 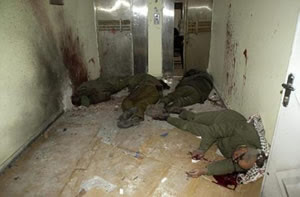 I recently corresponded with Arab American poet, D.H. Melhem, and we wrote about the difficulties and responsibilities that lay claim to our work. In the spirit of poetry about the conflict in Israel/Palestine that attempt not only to represent the situation but call forth our better selves against the ritual of violence, I'd like to share this poem by Melhem.

THOSE POLICEMEN ARE SLEEPING: A CALL TO THE CHILDREN OF ISRAEL AND PALESTINE

Caption: Four Palestinian police officers lie dead in a Ramallah office building, Saturday, March 30, 2002. The five bodies (one not pictured) all with gunshot wounds to the head, were laying in a dark hallway where the walls were splattered with blood and bullet holes. (AP Photo/Nasser Nasser)

Those policemen are sleeping. They lie,
five in a doorway, each one neatly shot in the head,
huddled like derelicts. In the dereliction of death, they cannot guard
Ramallah, or Arafat, or anything or anyone.
They cannot guard children or mothers or old men.
Their blood, no longer confined, dances freely out the doorway
toward blasted olive groves and rubble of bulldozed homes
and shows its sad triumph in the street:
We are fathers, lovers, people like yourselves! it cries.

A few miles away Israeli children are sleeping. Dead in holiday clothes.
A Palestinian boy in pieces among them. They are all sleeping, sleeping,
all belong to one signature. They don’t need identification cards,
or passports. They don’t need to sign in or sign up.
God/Allah/Jehovah welcomes them. It’s like a festival in heaven.
Pesach and Easter, cakes and goodies and traditional sayings,
chanting and singing and hard-boiled eggs,
bitter herbs and date cakes. All the shades sharing one earth,
a single territory, the air sweet above them, the sky a heavenly blue,
while the music of the spheres, like bells of sunlight,
chimes each flight into heaven.

War keeps taking, taking
sucks marrow,
marries the dead to the dead
and the living to the dead.
War is insatiable,
it has a stomach for youth
the delectable sweetness of babies
it spits out old people
it spares lives as lottery prizes.

What Moloch is this who beckons Israel?
And beckons Palestine?
Or is it a brave ancestor who fought vainly,
who summons you to his fate?
Is the world better off
for the killing?

Cure yourselves of the past.
It loves only itself.
Its plagues of grief and vengeance
that heavily armor the heart
and seemingly coat it with mail
can be as light as a shroud
or a mirage
in your vision.

Another world is possible.