From Gaza to Sderot and Back Again: A Palestinian and an Israeli Blog Together 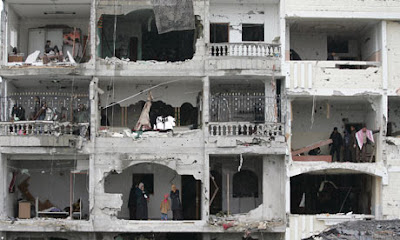 When a slaughter is going on, and calls for a ceasefire are the most immediate items of business--I myself called my Senators to ask for an immediate ceasefire and an end to the economic blockade of Gaza--it is a momentary balm to hear of stories of friendship and trust between Palestinians and Israelis, such as the one between Peace Man and Hope Man that I've heard on npr the past couple days.

They are, of course, an extreme minority, and yet in their example they offer us the image and model of a common humanity, a sense of connection that goes beyond national identifications, some distant light by which to guide ourselves to coexistence. They have overcome, no doubt, great barriers within themselves and from their communities just to establish this bond, and for their courage they are warriors for peace. There is a blog called "Life must go on in Gaza and Sderot," in which a Palestinian (whose nom de plume is Peace Man) and an Israel (Eric Yellen, Hope Man) correspond together and to all of us.
This is their description of the project:

This blog is written by 2 friends. One lives in Sajaia refugee camp in Gaza and the other lives in Sderot, a small town near Gaza on the Israeli side. There is ongoing violence between Israel and Gaza which has intensified greatly since October 2000. Many have been killed and many have been injured. The media coverage on both sides has been extremely biased. Our Blog is written by 2 real people living and communicating on both sides of the border.

In Peace Man's recent posting, thirty-seven comments emerged, one of which, by Amina Altaf, shared this:

I heard about you both on a local radio station (NPR) in Boston. Each day while driving to work, I listen to the depressing news of innocent people dying in the Gaza/Israel region due to the recent conflict. After listening to it all and hearing the government/political officials on both sides, I get even more aggravated. All I can hear is them pointing fingers at each other. While the blame game goes on, no one is ready to take responsibility. They pretend to be fighting for the country and their people, yet their people are dying. I wonder if the people of Gaza and Israel ever question -- are our leaders there for their own agendas or are they really fighting for the land and the people? As the drive ends I try not to think about it. Not because I don't care, but because it’s saddening. At the end of the drive I tell myself I need to listen to something more exciting to start my day tomorrow.

However, curiosity gets me tuned in again. Tonight as I drove back from work, I heard about you both. It made me want to cry since I can’t even fathom what you both have to go through, yet you instill a sense of hope – a hope for peace. Your writing is way more powerful than what the media delivers. It’s the story of Israel and Gaza that I wonder about and find rather different than the propaganda we hear. I want to thank you both for your courage and wish you a safe and peaceful life with your family and friends.

We need stories like these, even though they won't end the conflict themselves, they show us that peace between peoples might be possible.

A number of stories have been told/written about them, including this one.
Posted by Philip Metres at 8:06 AM

Looking forward to seeing you in a couple of weeks in Cleveland! Meanwhile, this perhaps too arch contribution to the cause...

m, between him, us—
odorous aroma, o-
lives not pressed, not oil.