Review of Mary Weems' An Umistakable Shade of Red and The Obama Chronicles (Bottom Dog Press, 2008) 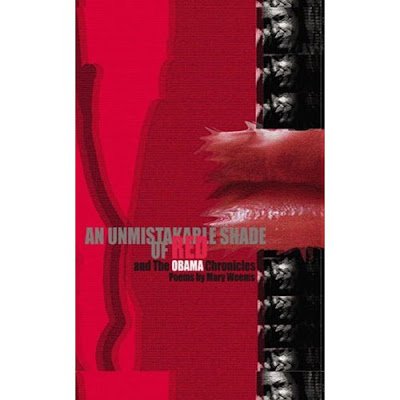 Review of Mary Weems' An Umistakable Shade of Red and The Obama Chronicles (Bottom Dog Press, 2008)
by Philip Metres

Poet, educator, and playwright, Mary Weems has been a fixture in the Cleveland poetry scene for many years, a standout performer whose words always resonate on the page. I can still recall the first time seeing Weems read her work. It was part of a Get Lit! event at John Carroll University, in which faculty writers shared their work. In contrast to the other poets and writers reading that day, Weems stepped from behind the podium, and walking between the rows of students and faculty, began to recite, intently looking at individuals in the audience.

Her sheer physical presence, the embodiment of her words, and her active eyes stunned and mesmerized. She made me feel then as if the poetry--poetry itself--consisted of both body and words, and of the breath between them. I’ve often tried to describe the look in the eyes of poets who recite their work; it seems both far-off and incredibly intimate, in the way that an actor is both herself and the text being recited. It’s as if Weems were the well and the woman at the well, drawing water (words) out of herself to sate herself and us.

In the book Cleveland Poetry Scenes, co-edited by Weems, she recalls writing her first poem “titled ‘Death,’ at the age of thirteen after seeing a young African American male carried off in a stretcher following a fatal one-car accident on E. 116th and Corlett, right outside of John Adams High School” (237). She has been writing ever since, responding to the inner and outer occasions of grief and wonder. Though she made her chapbook debut in 1996, with a collection called white (Wick Poetry Series, 1996), and sold out the first run of Tampon Class (Pavement Saw, 2005), An Unmistakable Shade of Red and The Obama Chronicles (2008) is her full-length poetry collection, distilling some of her best work from previous chapbooks and adding a timely sequence of poems in dialogue with the meteoric rise of Barack Obama in 2007 and 2008.

Melding a page-based poet’s desire for compression and enjambment, with a performance poet’s longing to ride the expansive cadences of breath, Weems’ poetry feels equally at home on and off the page, as in the elegiac poem “Father”:

His line on my birth certificate
is blank

but he’s in all the words
I don’t say

my prayers each night

It’s that sudden trickiness of syntax, the rupture of enjambment in the final three lines—should we read these lines as “he’s in all the words I don’t say” or “I don’t say my prayers each night”?—that makes her poetry worth multiple reads.

An Unmistakable Shade of Red and The Obama Chronicles (2008) demonstrates a wide range of poetic forms and subjects—-from haiku to kwansabas, from ekphrastic poems to musical pieces-—but what draws them together is the poet’s vision of poetry as a dialogue between herself, art, and the world. (Her haiku, in particular, made me feel haiku were possible again: “When you lose your mom/to transition, the hole in/your navel closes.”)

We always sense, in Weems’ work, that the poet is not satisfied with having her say to herself and for herself alone; in the call-and-response tradition, Weems is—-avidly, enthusiastically—-the responder to the calls of world and art. Whether writing kwansabas to June Jordan or James Brown, or creating ekphrastic poems in dialogue with works of art; whether witnessing a scene at a local bus stop or responding to inner-city billboards, Weems is constantly in conversation with what surrounds her, talking back and taking back a sense of what it means to be alive to one’s environs, to resist dehumanization and despair, to attune the inner and outer weathers.

USR catalogues the inner and outer life of an African-American woman, living in a troubled city, but, like a gritty Whitman, finds shards of hope. As she puts it, in “Aging,” “it’s me forgiving an illicit love affair with life,/for wanting more time in this place/that God is willing to give.”

Until this morning I had only heard of Mary Weems. The tune Doctor Weems whistles at the beginning of the video is an excellent introduction and counterpoint to her reading. She has s strong voice.

About the enjambment: It's possible her "prayers each night" may be silent ones.