On Poetry and Generosity: an Interview with Kathy Engel 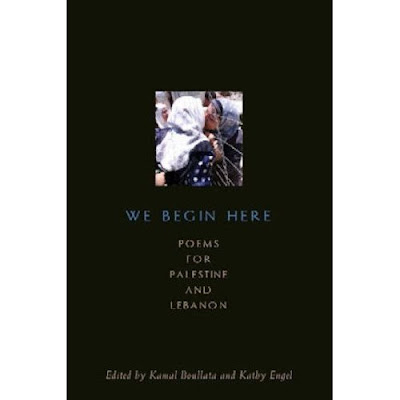 Found this interview with poet and editor Kathy Engel, who co-edited the powerful We Begin Here: Poems for Palestine and Lebanon.


Kathy Engel is the founder of MADRE, the international women's human rights organization. She is also a poet, cultural worker, producer, and consultant for peace, human rights, and social justice groups. She is author of the books Banish The Tentative and Ruth's Skirts. Here she talks to FPIF's E. Ethelbert Miller about her poem "Inaugural" on the eve of the inauguration of President Barack Obama.

E. ETHELBERT MILLER: Your poem "Inaugural" reminded me of the work of Whitman, Neruda, and Cardenal. It begins with the lines, This is the time/to be generous. What is the political significance of this word "generous," considering the economic conditions that we now live in?

KATHY ENGEL: I am deeply honored to be associated with my poetic heroes Whitman, Neruda and Cardenal. Their poems are stones and rivers I return to daily. I often feel Neruda literally keeps me alive, reminding me of how and where smallness and largeness meet. Whitman's work introduced me poetically to the body as universe, the body as natural world. I experienced an expanse of breath in his work; possibility.

Cardenal and Nicaragua are one and the same to me. I spent years working with the people of Nicaragua beginning in 1983, just four years after the Sandinista victory. I found a newly birthed country, embattled and brimming with poetry, danger, and the possible. Cardenal's poem "The Parrots" expresses the violence of imperialism and colonialism, imposed culture, and the beauty and necessity of speaking one's own language; the true liberation of one's own voice and telling.

I have two photos of Cardenal: one with my late dad, who made a documentary about Nicaragua in the 1980s, and one with my daughter Ella when she was 12. Meeting the people of Nicaragua at that time in history, after creating the dramatization and video Talking Nicaragua, with June Jordan, Sara Miles, and Nina Streich, and then starting the organization MADRE, became one of the most important living poems in my life.

Now to your question! Generosity means letting go. Risk, community, wholeness. Consumerism, greed, narcissism, and narrow-mindedness have exploded in our faces in the form of "economic crisis." It's a kind of economic autism. We know that most of the world, and so many in this country, have been living in economic crisis all along, while at the same time many in this country have blindly acquired and borrowed, acquired and borrowed, without a sense of connection to community or earth.

We are also living in a time of amazing paradigm shift and openings. Economic journalist Paul Krugman and others say that this economic crisis is the perfect time to invest in the people. This makes sense to me intuitively and poetically. To invest, one must let go. We must also invest in our own imaginative forces, trust the "yes we can" in all its manifestations. Poetry is rooted in generosity. It is the window letting air in and the air itself, and everything complicated that one sees and experiences in the air when looking clearly. So the significance is not simply political, but human, which of course is political in the deepest sense.

Generosity is a necessity for a new way of living together, in families, in the workplace, in communities, across borders, on this planet. It also means thinking about what you need and about what other humans and animals need, what the earth and air needs. Living connected. This sounds like a cliché, but for a reason — I have encountered the most generous people often in my travels to war-torn places where people were struggling each day just to get bread on the table, just to survive bombardments and raids in the Occupied Territories of Palestine, El Salvador, Nicaragua. The generosity comes from someplace deep inside and a way of being in the world. A sense of history and continuity. A generosity of imagination, together with discipline, might allow us to rethink where we are and move towards what Wendell Berry calls "coherent community," what King called "beloved community."I think the Obama culture opens the country for the marriage between discipline, service, imagination, and generosity. I'm not talking about a floppy generosity, but a fiercely dedicated, complex one.

We need to redefine ownership, the economics and possible largeness of mutual ownership versus the limitations of individual possession, in light of the stress of resources we have, as a species, created on the earth. Young activists and artists know this. My students are engaged in "bike-shares," and creating art from garbage and community gardening.

There are times, and perhaps this is one of them historically, when crisis leads to greatness. One wishes it wouldn't take crisis. Often death and suffering lead to new consciousness, new sight. Perhaps these challenging economic times, along with the layers of possibility signified by Obama's leadership, will lead to rounder thinking.

We live in abundance and act out of a sense of scarcity. Even in this crisis we are surrounded by abundance, just not shared abundance. At the same time, there is famine in Zimbabwe, occupation in Iraq and Palestine, chaos and uprootedness, unhealed wounds, displacement, and poverty in the Gulf Coast.

Generosity can become pragmatic and be implemented by programs and policies. But it is a way of walking into the day. Fundamentally, the politics of generosity can't be separated from the politics of listening and empathy.
MILLER: I've been looking for poetry that will be as transforming of our cultural landscape as Obama has been to our political one. How might someone overseas interpret your poem? Are you proclaiming a new America has come into existence?

ENGEL: I'm also looking for transformative poetry and all our artistic expressions, an opening in our cultural landscape. It's interesting because I still find the "progressive" culture, whatever that is, to be very reticent to let go, to really transform. I believe that has to do with so long assuming we can't win. And now there is a shift, and we have to shift with it.

How might someone overseas interpret my poem? As a wave, perhaps. An embrace. Hopefully some soil with seeds and a river. A listening and a beckon.

I am not proclaiming a new America has come into existence. I don't have to. Look out the window. Listen. To every young person in the Young People's Project, Detroit Summer, Brother Sister Sol, Global Kids, the Palestine Israel Education Project, Finding Our Folk Tour, the League of Young Voters. The Hip-Hop Theater Festival. My students and yours. All the 20-somethings who ran Obama campaign offices around the country. The ones who welcomed my family and me in PA twice. Listen.

And we need to remember. Without memory we can't listen and we can't change. Remember all the work that's been done, the quiet, disciplined, imaginative, and dangerous work, all these years, that led to this new planting. Find the place which Whitman describes in "Leaves of Grass," the bridge where we look into the truth of the past, fully, with the blood, the loss, and then face forward.

And remember the places and people who today are still not being seen or heard. Remember how we need to hold Palestine. Haiti.

The ruptured earth.
Each child living in poverty.

If we can dare, be brave enough to fall knee-deep in our mistakes, in the bad poems too, then perhaps we will create the poetry that will be transforming in the way you describe. The poetry that dares in the same way we have to dare to redefine all the important things — what is health? What is a meaningful education? What is peace? Poets need to open up these terrains. And let us give poetry its place in this new day. It was annoying during the Democratic primaries that journalists and pundits attempted to diminish the meaning of Obama's gift with language. But he won. Poetry won!

Let us do more than have an inaugural poem or try to get a job in the new NEA. Let every office of everything have a poet in residence. Let poets work on policy language. Let poetry guide us into a world driven by empathy, and yes, generosity; a lyrical, toughly truthful, multilingual world in which we can hear the clams, the porcupines, the worker who hasn't had a break since he or she can remember, and the children who've been told to keep quiet.


Kathy Engel is a poet, cultural worker, producer, and creative and strategic consultant for peace, human rights, and social justice groups. She is the co-founder and founder of numerous organizations, including MADRE and Riptide Communications. She is the author of Banish The Tentative and Ruth's Skirts, and teaches at NYU.

E. Ethelbert Miller is an award-winning poet, the director of the African American Resource Center at Howard University, and the board chairperson of the Institute for Policy Studies. His interviews are a regular feature of Fiesta.

Posted by Philip Metres at 6:34 AM