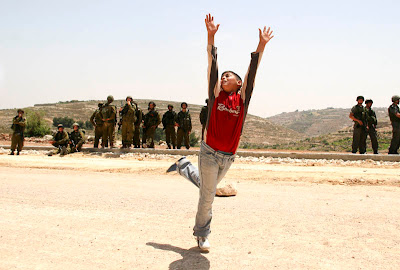 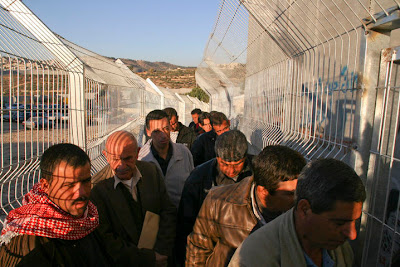 Here's a link to a recent article of mine, published in College Literature, called "Vexing Resistance, Complicating Occupation: A Contrapuntal Reading of Sahar Khalifeh's Wild Thorns and David Grossman's The Smile of the Lamb."

Here's the abstract:
This article examines two novels representing the fifth year of Israeli occupation of the West Bank (1972)--Wild Thorns, written by (Palestinian) Sahar Khalifeh (Arabic: سحر خليفة) and The Smile of the Lamb, written by (Israeli) David Grossman--testing the possibilities and limits of Edward Said's notion of contrapuntal reading in the Israeli/Palestinian context. While both novels address primarily their own nation, both bridle against the limits of nationalism. Wild Thorns dramatizes the diversity of struggle within Palestinian society to resist military occupation, complicating Orientalist views of Palestinian society. By contrast, The Smile of the Lamb examines the psychological and moral damage of occupation to both Palestinians and Israelis. In tracking the relationship between an Israeli soldier in moral crisis and an Arab outcast grieving the death of his son, Grossman's novel opens up the possibility of cross-national identification in ways that echo and extend Khalifeh's novel.

Here are the epigraphs and first paragraph:

The main battle in imperialism is over land, of course; but when
it came to who owned the land, who had the right to settle and work
on it, who kept it going, who won it back, and who now plans its
future--these issues were reflected, contested, and even for a time
decided in narrative. As one critic has suggested, nations themselves
are narrations. The power to narrate, or to block other narratives
from forming and emerging, is very important to culture and
imperialism, and constitutes one of the main connections between
them. (Said 1993, xiii)

Two children of the same cruel parent do not necessarily love each
other. They often see in each other the image of the past oppressor.
So it is, to some extent, between Israelis and Arabs: the Arabs fail
to see us as a bunch of survivors. They see in us a nightmarish
extension of the oppressing colonizing Europeans. We Israelis often
look at Arabs not as fellow victims but as an incarnation of our own
past oppressors: Cossacks, pogrom-makers, Nazis who have grown
mustaches and wrapped themselves in keffiyehs, but who are still in
the usual business of cutting fewish throats. (Oz 1996, 8-9)

Sumud is watching your home turned into a prison. You, Samid, choose
to stay in that prison, because it is your home, and because you fear
that if you leave, your jailer will not allow you to return. Living
like this, you must constantly resist the twin temptations of either
acquiescing in the jailer's plan in numb despair, or becoming crazed
by consuming hatred for your jailer and yourself, the prisoner.
(Shehadeh 1982, viii)


Suicide Bombers. Religious War. Unwanted. PLO. Arafat. Aggressive. These were among the initial (and anonymous) free associations for the word "Palestinian" that my students wrote down and shared during the first day of my course on Palestinian and Israeli Literatures. (1) How do earnest and thoughtful Midwestern college students at a fine liberal arts university come to such reflex impressions?

We need look no farther than our mass media. Take, for example, an issue of Newsweek Magazine, dated June 25, 2007, during the battles for control over Gaza between Palestinian factions Hamas and Fatah, which preceded the 2009 Gaza bloodbath. The cover photo shows a Hamas fighter, dressed in black and face hooded except for his eyes, straddling atop a tank and holding an AK-47 (pointed, as it happens, right to "JOLIE," whose name and story graces the header title: "ANGELINA JOLIE TAKES ON THE WORLD." (2) The main title--"Why Gaza Matters: NEW VIOLENCE, OLD HATREDS AND A GROWING RADICAL THREAT TO AMERICA'S HOPE FOR THE MIDEAST"--attempts to situate the conflict in Gaza as part of our concern, our hopes for the Middle East (for democracy, ironically, given our complete embargo of the democratically-elected Hamas government). The image is menacing, phallic and almost faceless.

Inside the magazine, the panoply of photos that illustrate the story falls into all-too-familiar categories of Orientalist images of Middle Eastern life: 1) masked fighters, 2) the dead, 3) mourning hijab-wearing women, and 4) swarming crowds. All these images, save one, are images of people without faces, whose faces are occluded, shut off, or lost in crowds. If the face-to-face encounter is, to paraphrase Emmanuel Levinas, the ethical moment, the moment in which we encounter the radical and irreducible otherness of another person, we can say without hesitation that the images displayed in these photographs render such an encounter almost impossible.

There is one exception to this Orientalist cast of images, however. It appears in the blurred face of a Palestinian youth turned toward the camera as he helps others lay a bleeding Palestinian man onto a gurney in an emergency room. He is overcome with terror, and his face is almost pleading. In this moment, we as viewers are interpellated into the scene, and find ourselves in the moment that Levinas describes as when "the face is the other who asks me not to let him die alone, as if to do so were to become an accomplice in his death" (qtd. in Butler 2004, 131). For all the possibilities that this photograph invites, it also invites the uneasily imperial response--we must save these people from themselves--rather than ask, "How has it come to this?"

read on to see what these novels have to say about how it has come to this, and where next...
Posted by Philip Metres at 8:00 PM