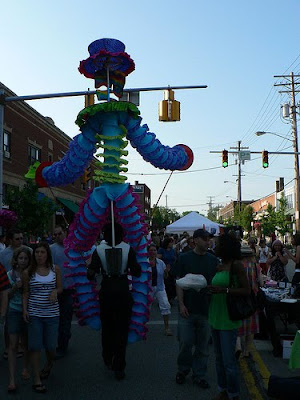 In Cleveland, the neighborhood of Coventry has always been the site of independents--independent businesses, freethinkers, and the culturally diverse. In short, someone once called it "Cleveland's version of Haight Ashbury." By the time I arrived here, it had only a vestigial hippie vibe. This recent project, Poetography, involved the pairing of 10 poets and 10 photographers, to capture something of its spirit. The opening is Saturday, April 10, 2-4 pm.

Heights Arts is celebrating its tenth year of arts in the city with a variety of arts programs, from visual to musical. And since April is National Poetry Month, this month’s program showcases a sample of regional poets paired with photographers in a display and book of Poetography.

Poetography is the idea of Cleveland Heights Poet Laureate Gail Bellamy facilitated by Heights Arts. Ten poets and ten photographers were invited to work together in randomly-assigned pairs to create poems and photographs about some aspect of Coventry Village. Their chosen subject matter ranged from the closing of Vidstar Video to back alley fire escapes to crosswalks to love and loss.

Meet the Poetography artists at Mac’s Backs Paperbacks, 1820 Coventry, at a reception Saturday, April 10, 2-4. There will be a reading and discussion at 3 pm. Posters of the ten paired poems and photographs will be on display right next door at Tommy’s, 1824 Coventry, and in selected Coventry storefronts the month of April.

Poetography is made possible thru the generous support of the following:

Poetography is also generously funded by residents of Cuyahoga County through Cuyahoga Arts and Culture and by The Ohio Arts Council with state tax dollars to encourage economic growth, educational excellence and cultural enrichment for all Ohioans.

Posted by Philip Metres at 9:59 AM