Freshen' Up Your Drink, Guv'nor?/Paul Kramer's "The Water Cure" 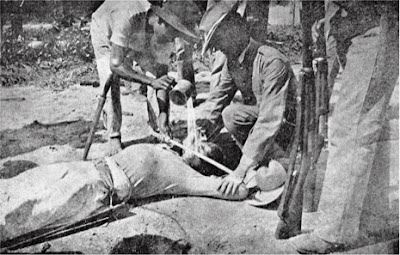 Thinking too much about torture these days, and yet I came across an astonishing article by Paul Kramer about an earlier debate regarding water torture, from the beginning of the 20th century, in the recent New Yorker magazine, called "The Water Cure." It begins like this:

Many Americans were puzzled by the news, in 1902, that United States soldiers were torturing Filipinos with water. The United States, throughout its emergence as a world power, had spoken the language of liberation, rescue, and freedom. This was the language that, when coupled with expanding military and commercial ambitions, had helped launch two very different wars. The first had been in 1898, against Spain, whose remaining empire was crumbling in the face of popular revolts in two of its colonies, Cuba and the Philippines. The brief campaign was pitched to the American public in terms of freedom and national honor (the U.S.S. Maine had blown up mysteriously in Havana Harbor), rather than of sugar and naval bases, and resulted in a formally independent Cuba....The Americans were not done liberating...

Posted by Philip Metres at 8:29 AM