Father, into your hands I commend my spirit.

For all my foes I am an object of reproach,
a laughingstock to my neighbors, and a dread to my friends;
they who see me abroad flee from me.
I am forgotten like the unremembered dead;
I am like a dish that is broken.
--Psalm 31

Last night was the beginning of the Easter Triduum, the three days of Easter, beginning with Holy Thursday, when the priest bends to his knees to wash the feet of his parishioners. In Rome, Pope Francis spoke about God’s infinite mercy. In his words:

Mercy restores everything; it restores dignity to each person. This is why effusive gratitude is the proper response: we have to go the party, to put on our best clothes, to cast off the rancour of the elder brother, to rejoice and give thanks… Only in this way, participating fully in such rejoicing, is it possible to think straight, to ask for forgiveness, and see more clearly how to make up for the evil we have committed….

We remind ourselves that there are countless masses of people who are poor, uneducated, prisoners, who find themselves in such situations because others oppress them. But we too remember that each of us knows the extent to which we too are often blind, lacking the radiant light of faith, not because we do not have the Gospel close at hand, but because of an excess of complicated theology. We feel that our soul thirsts for spirituality, not for a lack of Living Water which we only sip from, but because of an excessive “bubbly” spirituality, a “light” spirituality. We feel ourselves also trapped, not so much by insurmountable stone walls or steel enclosures that affect many peoples, but rather by a digital, virtual worldliness that is opened and closed by a simple click. We are oppressed, not by threats and pressures, like so many poor people, but by the allure of a thousand commercial advertisements which we cannot shrug off to walk ahead, freely, along paths that lead us to love of our brothers and sisters, to the Lord’s flock, to the sheep who wait for the voice of their shepherds.

(I’ve been struck, reading Scripture during this Lenten season, how much of the Gospel writing has precursors in the Hebrew Scripture, particularly in the Psalms and Isaiah. Either Jesus consciously echoed such voices during his life, or the writers of the Gospels wrote him as the fulfillment of longings within Hebrew Scripture, or both.)

Today is Good Friday, the day that commemorates Jesus’s crucifixion. What we have today is a person suffering the most cruel torture, torture unto death. Torture at the hands of those who felt Jesus was dangerous, a risk to security and the social orders. Like Mohamed Farag Bashmilah, rendered into black sites and tortured there.

Thanks to William Kelley Woolfitt for his contribution and response to “Black Site (Exhibit Q).” 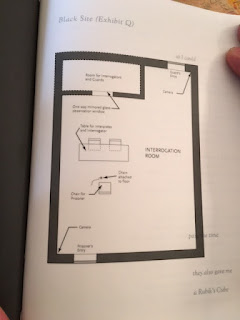 "so I could pass the time…” response by William Kelley Woolfitt

Two Digital Watches
Not for long, he marks the hours with a prayer chart, a watch with a map of the world. I did not have information I needed, he says. Guards take the watch, tape outside the glass another watch, its straps cut away. Time drags, he doesn’t look at the face.
Water
When given plastic bottles with the labels stripped, filled from a large drum, he washes his head and feet for prayer, drinks what might be tainted, impure, he cannot know.
No Mat
Best efforts, he says. He kneels, lowers himself, touches his flat palms and forehead to the gray floor, the covering, the dirt.
Chain
Fastened to an iron bolt, the chain lets him reach the bucket-toilet, freights his body, he can raise his right hand no higher than his waist.
The Sound of Waves
The speakers blast music, then pause, and he listens for the call of a far mosque—then a recorded ocean, seagulls, waves breaking a shore.

William Woolfitt is the author of the poetry collections Beauty Strip (Texas Review Press, 2014) and Charles of the Desert (Paraclete Press, 2016). He edits Speaking of Marvels
(chapbookinterviews.wordpress.com), a gathering of interviews with chapbook and novella authors. His poems and stories have appeared in Blackbird, Image, Tin House, Threepenny Review, Michigan Quarterly Review, Epoch, and other journals.

Posted by Philip Metres at 8:55 AM

I've used some of the Pope's words to fashion this poem:


brother, we are blind
for lack of forgiveness

cast stone
for lack of mercy

that do not lead


sister, each of us nows
how to put off
the voice of rancor

to give thanks
that the hand of love
restores everything

"but find ourselves / like so many others / in the way of sheep" !