In today’s Gospel, from John 7:1-2, there is this: “Jesus moved about within Galilee; he did not wish to travel in Judea, because the Jews were trying to kill him.” It’s amazing how this Gospel seems to fail to recognize that Jesus is a Jew. All those people in the Gospel were Jews. In light of what happened at a basketball game in Massachusetts last week, when some Catholic Memorial high school boys chanted “You killed Jesus,” it’s high time to recognize again not only the history of anti-Semitism in the Catholic Church, but that the Scripture itself contains the seeds of this othering. Of course, it’s been fifty years since the Church, during its Second Vatican Council, finally stated that this was false teaching and that “The Jews should not be presented as repudiated or cursed by God... The Church decries hatred, persecutions, displays of anti-Semitism, directed against Jews at any time and by anyone.”

It pains me to read these moments in Christian Scripture that lay the groundwork for this hatred. How can a text that is supposed to be sacred, to be wise, to be Godly, be so fundamentally flawed, so goddamned human?

And, if I’m honest with myself, it also pains me to read Hebrew Scriptures for similarly othering reasons. When we read Hebrew Scripture that references “Israel,” the scripture invites us to think of Israel as a beloved community, the community of faithful, the people of the Covenant. But I often find myself thinking about the modern state of Israel. While some call it a safe haven or the national liberation manifestation of the Jewish people, I think about my Palestinian brothers and sisters whose generations of families were dispossessed (and continue to be dispossessed) in its wake.

My question becomes: who is getting disappeared, silenced, and left out, whenever a narrative is being established, however holy or righteous or truthful that narrative seems?

Today’s “poem” from Sand Opera is not a poem at all, but an image of Saddam Hussein’s fingerprints, alongside Kim Stafford’s thought-provoking poem about the image. I’m reminded about how, in U.S. media, the figure of Saddam—a nasty dictator in every respect, who used chemical weapons against the Kurds to quell their uprising—came to disappear every other Iraqi. No one wanted to talk about the 22 million Iraqis, they wanted to talk about Saddam. The New Republic doctored his mustache on the cover of the magazineto make him look like Hitler. Meanwhile, thousands and thousands of Iraqi peopledied as a result of the bombing and sanctions. This is a bit from a poem I wrote, called “Quick Quiz”:

a)      3,000.
b)     5,000/month.
c)      Saddam Insane.
d)     Guy walks into a bar and sees Bush, Cheney and Powell sitting at a table in the corner. Goes up to them and asks what they’re doing. Cheney says, we’re planning to bomb Iraq to the Stone Age and they slit the throat of a bicycle repairman. Guy says, why you going to do that to the bike repairman? Cheney turns to Bush and says, I told you they don’t care about the Iraqi people.
e)      Gulf War syndrome.

The weird irony of history is that, given what ISIS has done, many Iraqis long for the days of Saddam. I’ve had a number of conversations with Iraqis who say, as bad as he was, at least he wasn’t ISIS. One of them, Ali, came to me at the end of a reading and thanked me for it, and followed up on my comment about Saddam by saying that, yes, he was a very cruel tyrant, but that after the so-called “liberation of Iraq,” his father had been assassinated for trying to get involved in politics. He would have preferred Saddam’s cruel order to the mayhem of the failed state of Iraq.

I’m in no position to say anything about the internal politics of Iraq. However, as a citizen of this (imperial) country, I can say that the narratives that we have imposed on others have erased many other narratives, and many voices, many fingerprints along the way.

The wind is blowing hard outside, the trees are bending from the force of it, the windows rattling.

How can we lean in and hear the voices, touch the fingerprints, of those our good intentions have blotted out? 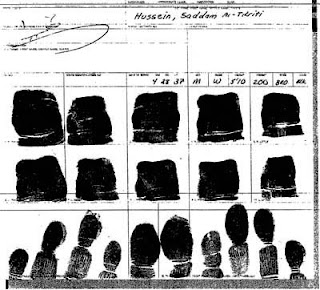 Remember the Quran some scribe completed
using the blood of Saddam to demonstrate the great one’s
deep devotion, those crimson pages displayed in a room
obedient pilgrims circled, reading, wondering,
amazed, horrified, transfigured by the dark
dream of life in those times before the great change—

Saddam, whose name meant the Powerful Confronter,
the Beautiful One Who Causes Collisions, later
hiding in his hole under dust trying to remember
which way was east, which destiny was to be
his own, the blood that fled from heart to fingers
circling yet inside his country constricted
to one man, one body, one fugitive
orphaned by history from his plans.

Remember the Quran writ in blood
of a war that could not be staunched, war
that finally pressed his fingers, inked,
to the grid some nameless survivor held
before him on the shaky table brought
for this purpose to his cell before
the rope was tied as a necklace
for the Confronter diminished
to this sack of blood inert
in the end that could not
be the end of the Quran,
or the war, or the circling
confrontation we are
living still.

Kim Stafford is the founding director of the Northwest Writing Institute at Lewis & Clark College, and author of a dozen books of poetry and prose, including 100 Tricks Every Boy Can Do: How My Brother Disappeared.
Posted by Philip Metres at 1:18 PM

Penn State professor Philip Jenkins has researched and written about violence in scripture. He told NPR in a long ago piece about his surprise that, on comparison, the Bible is more violent and bloody than the Quran, though he added that today Christianity and Judaism "are not [violent] for the most part", the latter a claim I'd have to argue with. (http://www.npr.org/templates/story/story.php?storyId=124494788)

Resort to violence is a failure of imagination on so many levels. Violence in the name of any religion is, for me, unforgivable. And I say that knowing how un-Christian it is to not forgive.

Maureen, I saw that research on the ancient holy books and violence as well. What we do to prove our fealty to our group, in the name of God, often must make God do a big smh.