Of Plimoth Plantation, Pawtuxet, and Palestine 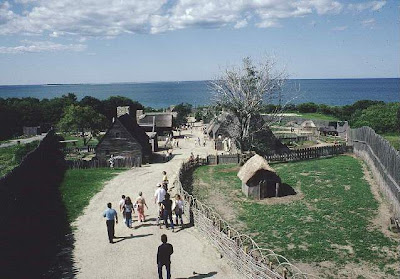 We spent the day walking around the "living museum" of Plimoth Plantation--site of the literary William Bradford and Pilgrims of yore, and what was formerly Pawtuxet, the Wampanoag village that had been wiped out by disease just prior to the landing of the Mayflower, by previous European incursions. Thus, the Pilgrims could say, only half-truthfully, that they had come to an empty land that God ordained for them.

The Hobbamock homesite, named after the Wampanoag who was assigned to live near the settlers, is a relatively recent addition to the site, and the people there, we are told by signs, are not re-enacters. But when we walk around, and talk to the people, we find them dressed in traditional, re-enacted dress, and oscillate between ritual re-enactment and rather contemporary discussion of how they got the bark for the roof from a place in Rhode Island.

6. Is there any special way to talk to the Native People on your staff?

There are several important things to keep in mind when talking with Native staff. First of all, you should be respectful of their culture, traditions and history. Please avoid questions or comments that are based on stereotypes, such as war whooping or saying "How" as a greeting. Remember that Native staff members are talking from a modern perspective, in their own words, and are not role playing "characters" from the past. They welcome questions about the history and culture of their People, however, please do not ask them personal questions about their lives. For more information about asking questions with sensitivity, please go to our Cultural Sensitivity page.

Ask lots of questions.
Look and listen in on other visitors' conversations (it's OK to eavesdrop here).
At the Wampanoag (Wampanoag) Homesite you will be learning about a different culture, so don't be afraid to ask the Native staff members to repeat something or to explain a word or idea if you don't understand.

In a sense, the staff are also re-enactors, even though their re-enactment carries some kernel of ritual action, of living tradition. Still, that made asking questions all the harder for me. I felt more able to talk to the same guy in the gift shop picking up a soda than the same guy in a loin cloth fixing the bark roof back at the site. He, of course, was off the clock and wanted a few minutes to himself.

At Plimoth, I was struck by the oddity of talking through history with the re-enacters, who well know the history but who are stuck, strangely, in a kind of unknowing. They meld their minds with a distant historical present. Do you know, I wanted to ask, what will happen? Is there any way to stop this genocide? Or are we all foreordained to follow blind our ways to their bitter end?

Indigenous Youth Delegation Lands in Palestine
By Karen Yi and Jaisal Noor
August 12, 2009 | Posted in IndyBlog , Jaisal Noor | Email this article
Eighteen indigenous youth from across the United States are in the midst of a two week trip to Palestine sharing tribal histories, learning strategies of preserving culture, and connecting their similar struggles against displacement and oppression.

The Palestinian struggle against Israeli occupation is one that Native Americans can easily draw parallels. From targeting of civilian populations with overwhelming military force, to forced displacement, restricted travel and the eradication of a people’s history and way of life are all too familiar for Native Americans living in the United States.

More than 500 years ago, the indigenous peoples of America experienced similar scenes of displacement and colonization at the hands of European settlers.

The Israeli government has rejected the Obama administration’s continued demands to cease settlement expansion. Israel continues to reject Arab offers for a peace plan in return for the withdrawal from the occupied territories, while the United States continues to provide $3 billion dollars in military aid to Israel anually.

Today’s indigenous youth are taking matters into their own hands.

Natalia Faviola García, a 19 year old grassroots organizer with the Bay Area based group Huaxtec hopes the trip will forge lasting ties. “By building personal connections learning from experiences of Palestinian youth, we have tools not just to help raise awareness and build support locally for Palestinian and other causes internationality, but to understand the historical forces and process that have lead to our every day reality,” she said.

Palestinians have lived under occupation for the last 41 years. In the past weeks Israeli settlers went on a rampage attacking Palestinain land and destroying over 1500 Olive trees. Israel recently announced it would ban the Palestinian term “nakba” from textbooks in Israeli schools. Palestinians refer to Israel’s 1948 war of independence as the “nakba,” or “catastrophe,” since it caused the expulsion of hundreds of thousands of Palestinians from their homes and left them without a state.

The delegation is traveling to refugee camps, villages and youth centers, using grassroots media and creative forms of art and expression, like music and poetry to build solidarity and learn from each other’s struggles.”For us to draw those parallels and to connect with people with similar struggles,” says Melissa Franklin, an undergrad at Haskell University, who will travel to Palestine, “we can start building a foundation of what can we do now.”

Aurora Castellanos, a member of Huaxtec says she is not only representing her indigenous roots, but also the immigrant community. She explains that the checkpoints and movement restrictions in Palestine, “is really similar to what many immigrants face in the U.S.” “Like my family, we walk around the street not knowing whether they’re going to have a checkpoint or whether they are going to be checking our licenses, or they’re going to get detained for being undocumented,” she said.

The delegation is blogging at: http://indigenousdelegation.wordpress.com

Posted by Philip Metres at 4:38 PM

I actually got an idea for a short story while I was there, the substance of which will remain top secret until I can produce it.

But thanks--George Saunders is great. What have you read that you recommend?