Artless Gratitude for the Fact of Existence 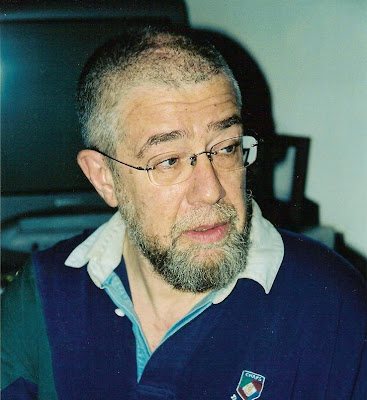 Yesterday, I spent half the half-rainy day in Moscow, steeping in the crowds along Tverskaya, the city transformed since my last visit--the statue of Pushkin now crowded by huge signs for Nokia and Pepsi Co. Still, the old man stands his ground, looks down--or rather, inside. The old weird Moscow will not disappear, but you might have to get past the pomaded and bedecked youth, whose styles outstyle the European jetsetters, and hear the poetry of regular life. Here's a poem by Gandlevsky, "Stanzas," and an essay, "The Use of Poetry," to stereoscope the image a bit.

Stanzas
—In Memory of My Mother

Speak. But what do you want to say? Perhaps
How the barge moved along the city river, trailing sunset,
How all June until the solstice
Summer stretched on its tiptoes to the light,
How breath of linden blew through sultry squares
And how thunder rolled from all directions that July?
You once believed that speech needs an underlying cause
And a grave occasion. But that’s a lie.

Listen: the grocery store reeks of watermelon rot,
An empty crate clatters at a back door around the corner.
From the suburbs, a breeze carries the echo of a handcar
And buries the asphalt in archive leaves.
Drop the Rubik’s Cube to the ground – it’s not worth the trouble.
When all plans fail, eat grapes in the rain,
Sit in the silent yard. Just look with your own eyes.
This is what you’ll recall among the crags and crevices of hell-

So get going. Yet a naked branch – the upas
Of school texts – stubbornly touches the window
Just as it did long ago, at night, especially during rain,
Feeling the pane that mama washed.
Though I remember very little from school
I can still see each grain of sand pouring through
The narrow glass neck, an unforgettable rustle.
A primitive instrument, but what a throat for sorrow!

Strike spitefully on the floor your ever-wobbly tripod,
Haggard charlatan, not hiding your crookedness,
So that a clear specter of water streams out, smells of ozone
Under the leaking roof of a state-owned house.
The chair jolts you with static electricity,
So speak again, as if tortured, sans schools and manifestoes,
If this hopeless time and god-forsaken place
Instill in you, a total deadbeat, such love.

The widower, forty-seven year old Aizenstadt
Now roams the kitchen, can’t cop his usual downer.
Is there reason to smile at this, my friend? I think not.
Even if his funeral-black boxers hang down to his knees.
In this world, where one needs spirits to be happy,
Behind empty crates the guys who’ve seen better days
Raise a toast to Sergey Esenin or Andy Chenier,
Squander their latest check on drink by tradition.

After death I’ll go to the outskirts of the city I love,
Lift my snout to sky, throw back my antlers-
Taken by sadness, I’ll trumpet into autumn space
What human words could not express.
How the barge sailed into the wake of sunsetting day,
How iron time on my left wrist sang like a starling,
How the secret door was unlocked with a house key.
Speak. There’s nothing else you can do with this affliction.

The Use of Poetry

A prize for poetry can baffle its recipient – when a private thing, a personal predilection that’s almost a whim, is rewarded. It’s as if an inveterate mushroom-hunter or lover of ice fishing were given a prize. It’s customary to think that there are all kinds of whims but poetry is a serious and hardly useless pastime. Yet in the last twenty years, many (and certainly the best) Russain poets have recoiled from the word “use.” Like little children, poets demand that they be loved for no other reason than that they exist.

Society is correct to treat poetry with seriousness, but poetry is also correct to hold onto the bulwark of its own uselessness.

It’s good to sit in the hot sun on the grass and look at a river. But the supposition that the sun, the plants, and the water have the goal and purpose of giving us pleasure hardly enters the healthy mind; about the meaning of nature we can only guess – each person is remitted a certain amount of imagination, intelligence, and temperatment. Such is poetry; its ulimate direct aspirations are unclear and mysterious; the impressions that it produces are only the indirect consequences of its existence.

We can hope that poetry will help us, but we cannot demand help from it. Poetry is a gift, not a salary. Only when we finally take into account, when we get used to the idea that the natural responsibility of poetry is to be poetry, it is conceivable, I think, to fold down your fingers and estimate whether poetry has an earthly task. Not insisting especially on anything, I’ll offer a few thoughts.

First. Occupied primarily by words and by himself, the poet day in and day out writes his ideal self-portrait, personifies on the page a dream about himself. The tactical allegory “lyrical hero” we should understand in its original meaning – the poet “heroizes” himself, displays the most vivid attributes of his personality, subdued in daily life by routine conflict. A constant contact with the ideal twin disciplines the author, helps him not to give up. The author feels that the gap is too wide between himself and the lyrical hero – it’s disasterous for both: the devastation responds as muteness in the best instance, and in the worst, idle chatter.

But the moral return from creativity is known not only to those who write; readers feel it as well.

Poetry relates to reality like a finished manuscript to a rough draft. Art didn’t invent the drama of life. The drama is in the nature of things, but things obscure it. Poetry focuses life to a sharp clarity, and the main celebratory foundation of existence becomes visible from everyday babble. Poetry is the subjunctive mood of life, to remember how we would be, if we were not…. In short, poetry is in a position to better our morals.

Second. Everyone knows that life is not sugar; loneliness is perhaps the most bitter of its burdens. A person often cannot share his despondency, his sudden thoughts, his good moods, but he opens a book, and he’s somehow not alone. It turns out that total strangers were already here, were thinking, were happy or angry like he was, and for the same reason that he is. Suddenly, these people are no longer strange to him. That revealed spiritual likeness bothers the teenager’s feelings of his own exclusivity, but soon enough we become adults and have it up to here with our own exclusivity. In other words, art is also a communication. And poetry is the best means of communication, because it’s the most emotional.

And third. Coffee boils over on the stove just as if it’s trying to put its head through a sweater; the Russian word “train” [poezd] is already preparation for “delay” [opozdanie]; after a twenty-year intermission, the old forgotten poet appears in public in a sport coat, buttoned enthusiastically in the wrong hole. This is all the costly small change of the world, in which we for some reason awaken once and for the last time. It is shameful to be hard of hearing and half-blind. If only inattention to our small creativity, not to say anything about apathy toward Creation, or the ailment of mechanical existence offended us more than profanity! Poetry can help us to value life. Even when a poet curses the universe, he has nevertheless noticed it; it has genuinely disturbed him. “Keen observation,” Mandelstam said, “is the virtue of the lyrical poet.” I dare to add that keen observation is a kind of gratefulness. Poetry, in the end, is always the artless gratitude to the world for the fact of existence. [1997]

“Stanzas” and ‘The Use of Poetry” both from: Sergey Gandlevsky, A Kindred Orphanhood (transl. Philip Metres), 2003, Zephyr Press, Brookline, MA.
Posted by Philip Metres at 12:50 AM