On the Anniversary of the Tulsa Race Riot: Wars on the Homefront 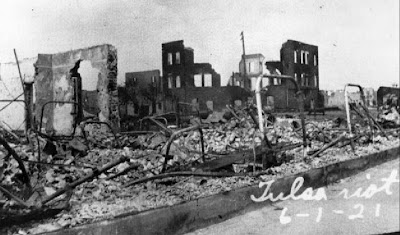 Nick Demske sent along an email commemorating the anniversary of the Tulsa Race Riot. According to Nick, who references Loewen's authoritative text, Sundown Towns, the riot is part of a larger phenomenon of American racism, the "sundown towns" excluded African Americans from a community (as well as other racial minorities).

Demske: "Staggeringly prominent throughout the United States, a number of them are still in practice today. What makes the Tulsca riot unique was how large it was. Loewen's book does not mention this but, according to other sources I've consulted online, the area was the epitome of a thriving, self-sufficient black community, now commonally referred to as "Black Wall Street." During the riot, deputized white men raided a munitions dump, commandeered airplanes (5 or 6), and dynamited the community, leveling houses and businesses. This makes it, according to Loewen's book, published in 2005, "the only place in the contiguous United States ever to undergo aerial bombardment."

From Wikipedia:
One of the nation's worst acts of racial violence—the Tulsa Race Riot—occurred there [in Greenwood, a black neighborhood of Tulsa, OK] on June 1, 1921, when 35 square blocks of homes and businesses were torched by mobs of angry whites.

The riot began because of an alleged assault of a white woman, Sarah Page, by an African American man, Dick Rowland. This incident produced even more hatred between the whites and the blacks even though there was no proof of the assault. The case was simply a white woman’s word against a black man’s word. The Tulsa Tribune got word of the incident and published the story in the paper on May 31, 1921. Shortly after the newspaper article surfaced, there was news that a white lynch mob was going to take matters into its own hands and kill Dick Rowland. [5]

African American men began to arm themselves and join forces in order to protect Dick Rowland; however, this action prompted white men to arm themselves and confront the group of African American men. There was an argument in which a white man tried to take a gun from a black man, and the gun fired a bullet up into the sky. This incident promoted many others to fire their guns, and the violence erupted on the evening of May 31, 1921. Whites flooded into the Greenwood district and destroyed the businesses and homes of African American residents. No one was exempt to the violence of the white mobs; men, women, and even children were killed by the mobs.

Troops were deployed on the afternoon of June 1st, but by that time there was not much left of the once thriving Greenwood district. Over 600 successful businesses were lost. Among these were 21 churches, 21 restaurants, 30 grocery stores and two movie theaters, plus a hospital, a bank, a post office, libraries, schools, law offices, a half-dozen private airplanes and even a bus system.[7] Property damage totaled $1.5 million.[7] Although the official death toll claimed that 26 blacks and 13 whites died during the fighting, most estimates are considerably higher. At the time of the riot, the American Red Cross listed 8,624 persons in need of assistance, in excess of 1,000 homes and businesses destroyed, and the delivery of several stillborn infants.[5]
Posted by Philip Metres at 9:29 AM