"Notes toward an Interrogation of Staged Violence" by Jeff Gundy 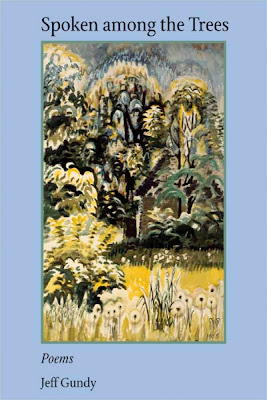 I had the good fortune of spending time with Jeff Gundy at the William Stafford Peace Symposium about a month ago, and have since devoured three of his books of poems, including his most recent, Spoken Among the Trees (University of Akron, 2007). I admire Gundy's admixture of impish wit and dogged humility, as he explores the restlessness of being human and longing for a better world in a plainspoken style that secludes a complexity of thought. Here's one of the poems, which reflects, at least in part, his Mennonite tradition's quarrel with violence.
"Notes toward an Interrogation of Staged Violence" by Jeff Gundy

Here’s your challenge: write a verse play in which nonviolence triumphs.
—ESR, 1/27/2006

Prelude:
Please be seated in this comfortable armchair. All questions will be asked in a calm and measured tone.
Would you prefer not to answer? Would you like a cup of tea, or a glass of whiskey, or a week in Cancun? Would you prefer that I punch you in the chops, or bomb an aspirin factory, or send the cruise missiles humming across the border like angry wasps ahead of the tanks and Humvees? I am only asking.

Propositions:
A story is not a war, but a creative alternative to stabbing your brother with a kitchen knife.
Time travel is indeed possible in the magic space of the stage.Violence is available for deconstruction and assimilation.
Nothing is inevitable, even after it happens.
We must learn the power of powerless bodies.

Historical Note:
The martyrs eschewed all force except that which they elicited from their enemies, thereby a) heaping coals of fire or b) glowing in the fiery furnace or c) both creating and transcending the Bloody Theatre or d) . . .

Illustrations:
Her soul floats above the horrifying scene, almost free.
The crowd obscures the audience’s view.
Hector drops the knife and weeps.
Angela achieves such sublime heights of serenity that she ascends to heaven in a narrow band of light.
Marilyn suddenly vanishes and there’s a maple tree in her place, or a raccoon, or the attorney general with his blue curtain gone and the bare-breasted Spirit of Justice in glorious view.

Dialogue (suppressed):
All right, we’ve had it. You are neither natural nor inevitable. The restraints are for your own protection. We have assurances from our legal advisers. Those fingernails . . . One more opening in that tender flesh . . .

Proposed Approaches:
Abuse the puppet, and let Naomi put on something comfortable and sit down with a magazine.
The lead couple makes love onstage in such dazzling fashion that the alien cyborgs do a total makeover on their cubical spaceship and beg us to assimilate them.
Instead of letting the bastard cut out Philomel’s tongue, change the whole crew into birds before anybody rapes anybody.
Everybody pauses at the crucial moment, exchanges glances fraught with significance, then goes out for Thai food or puts on the Beatles.
Hell, the Doobie Brothers.
Posted by Philip Metres at 7:17 AM

Wow, what a cool poem!

But seriously, thanks, Phil, for the kind words and the exposure.