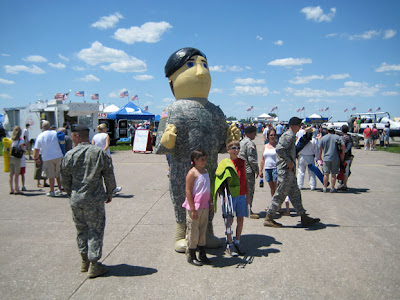 Just yesterday, I was having a conversation with my colleague about her son, who is playing some video war game set in the mythic past (fire-breathing giants and the like), and we talked about the uneasiness that we have about exposing our children to such violence and imperial thinking. 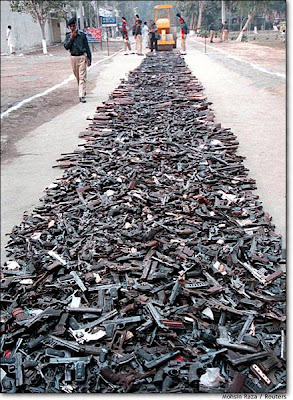 I recalled that, when I was a young boy, my mother forbade my father from even buying toy guns; then, a few days later, she saw me outside, playing with a friend, holding a nice stick as if it were a gun. I suppose I turned out all right, but it's fascinating how boys are so drawn to the mechanics and fictions of warfare.

Of course, it's not just boys: 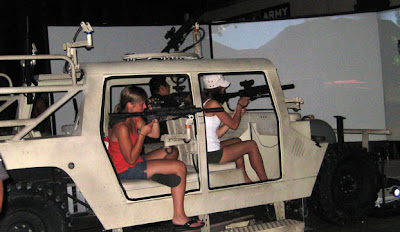 What happens when such psychobiological urges and imperatives (which could be mostly about "techne" and empowerment, rather than violence and domination--though I'd argue that even fantasy violence has a place in the world, even a pacifist's world) get exploited and harnessed by the military-industrial complex? 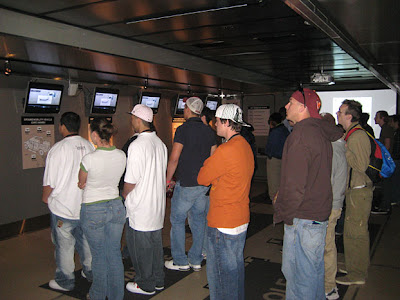 Simulated Killing at the Air Show

This year, the Cleveland National Air Show is hosting a new exhibit called the “Virtual Army Experience” (VAE) that we think is inappropriate and unacceptable. Participants in this virtual urban warfare game hop into full-size Humvee simulators and fire machine guns at life-size people projected onto giant, wraparound screens.

Consider the following:
• The Cleveland Air show is promoted as a wholesome family activity.
• Technology that simulates killing human beings has no place at an event that purports to be a celebration of aviation.
• The VAE misleads people about soldiering. It portrays a sanitized picture of war that disrespects what real soldiers experience in combat and trivializes the burden they carry the rest of their lives. War is not a game.
• The Army may call it “virtual,” but it inflicts real pain on those who have experienced the physical and psychological trauma of combat, have lost loved ones in war, or have lived with those who carry the scars of war.
• The VAE desensitizes young people to killing in our region, which has experienced far too much urban violence.
• Labor Day celebrates working men and women. The Cleveland Air Show’s stated pur- pose is to assist young people who seek careers in aviation.
• Tax dollars are being used to pay for the VAE.
Veterans For Peace opposes the inclusion of the VAE in this year’s Air Show. We respectfully ask the Army, the organizers, and the sponsors to remove the VAE as an activity. We ask that other peace activist groups, government officials, churches, mental health and educational professionals, and most importantly, PARENTS, join us in voicing their opposition.

My husband and I both feel that this exhibit is definately inappropriate for an airshow that is family oriented and supposed to show the military at their best as the Blue Angels or Thunderbirds fly overhead. We certainly hope that the use of this game is reconsidered and not used at the Cleveland Air Show. This is not something that Cleveland needs to live down! Thank you. Jeanne Eberl of Brunswick,Ohio