Mahmoud Darwish, Voice of the Palestinian People, Rest in Peace 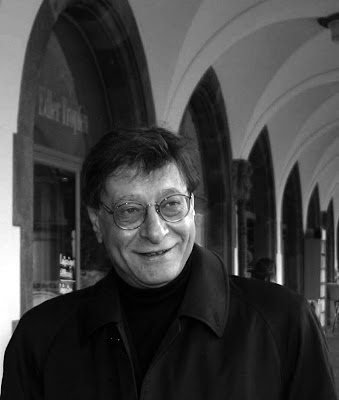 We've lost a great poet, a poet whose work spoke not only to the Palestinian people (though he is considered the greatest Palestinian poet), but to all of us. Mahmoud Darwish, rest in peace. He once said that history laughs at both victim and aggressor; it is a rueful joke that he never received the Nobel Prize, nor--more importantly--saw his country in freedom. In dispossession, exile, statelessness, oppression, Darwish became a poet who could, at the end of his life, write, "my throne is margin."

Here are some resources on Darwish's life, work, and passing.

This is from the Reuters article:

RAMALLAH, West Bank, Aug 9 (Reuters) - Mahmoud Darwish, whose poetry his fellow Palestinians embraced as the voice of their suffering, died on Saturday after heart surgery in Texas.

"The passing of our great poet, Mahmoud Darwish, the lover of Palestine, the pioneer of the modern Palestinian cultural project, and the brilliant national leader, will leave a great gap in our political, cultural and national lives," Abbas said.

"Words cannot describe the depth of sadness in our hearts," he added. "Mahmoud, may God help us for your loss."

The death of a man whose life and words were tightly bound up in a struggle for a Palestinian national rebirth that seems little closer now than when his first work was published in 1960 immediately triggered a wider outpouring of popular emotion.

I recently reviewed a translation of Mahmoud Darwish's The Butterfly's Burden for Jacket Magazine:

It is difficult to overestimate the importance of poet Mahmoud Darwish to Palestinian culture and national aspirations, not to mention to Arab and world poetry; at the very least, we might think of him as the poet laureate of Palestine for the past forty years, and in perpetuity. Born in Birwe in 1942 and exiled to Lebanon in 1948 during the war (when Birwe was wiped off the map), Darwish’s family returned to Israel as internal refugees, called “present-absent aliens.” Over the course of the next sixty years, he has lived all over the world, participated in the political and cultural life of Palestine as an exile, and then finally was able to come back, post-Oslo Accords, to live in the West Bank city of Ramallah in 1996.

His early work, in now famous poems such as the blistering “Identity Card” and the bitter-sweet elegy “My Mother,” Darwish embodied what Ghassan Kanafani and Barbara Harlow have termed “resistance poetry” — explicitly political writing conceived as a force for mobilizing resistance, and acting as a repository of national consciousness. Yet the range of his work — from the stark social realism of “Identity Card” to the visionary mode of “We Travel Like Other People” — makes him both a figure of Palestinian persistence and proof that Palestinian life is not reducible to victimization and loss.

The Butterfly’s Burden — a collection of his most recent books translated by Fady Joudah into a supple and lush English — The Stranger’s Bed (1998), A State of Siege (2002), and Don’t Apologize for What You’ve Done (2003) — aptly represents the range of Darwish’s mature style. From the courtly and ecstatic love lyrics of The Stranger’s Bed, to the diaristic and penetrating political poem of A State of Siege, to the colloquial meditations on mortality, history, and the future in Don’t Apologize, The Butterfly’s Burden bears witness to the generous breadth of Darwish’s poetic and cultural achievement.

Here is a blog posting of mine about his poem, "Identity Card."

Posted by Philip Metres at 7:49 AM

What a loss to all of us.