What if art is a detoxifier? “Anyone who had been bitten by a serpent looked at the bronze serpent, he lived.” That making an image of the thing is a homeopathy for the thing’s sting? 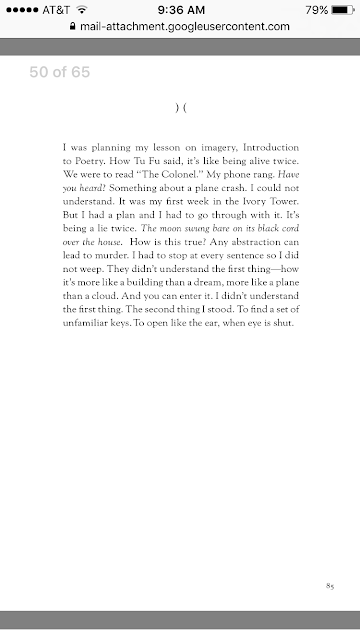 It’s a different story that surfaces, depending on the generation. But it usually refers to an act of violence that changes everything. What we hear less often on repeat are the many-layered ways we choose to live after.

For my family, this question might shake loose stories about the night my great-aunt was strangled to death; the morning a cousin’s body was found weeks after an overdose; or the post-9-11 morning my parents decided to do humanitarian work in Liberia after its 14-year civil war.

When I reflect on “I was planning my lesson on imagery,” I can’t help but invite the self I was in 2001 to sit alongside me. She is 20, an impassioned, pacifist music student about to fly to gritty Leeds, England for a year to serve as a Rotary International Ambassadorial Scholar. She has never had a friend who does not look like her, or who practices a different religion. Her main assignment abroad: to talk to at least 25 groups about “being an American.”

I also invite my writing teacher-self, born almost a decade later, to join us. She is about to start 10+ years of graduate work and adjuncting. It will take her five years after she first reads it to introduce “The Colonel” into a workshop of mostly white, middle-class undergrads, partly because she’s begun to see too much of herself in the poem’s speaker: a person of privilege and power, dropping in on what war can really mean, then getting to leave. Or—worse—who chooses not to enter the story of violence, even at the edges, or to come home to tell it in her own voice. Most of the students she’ll shepherd hold 9-11 as their first collective memory of national importance. They have always been living in the War on Terror, don’t know another backdrop to the story.

And yet, my faith practice tells me that the cornerstone of my living is built on reconciliation and radical community, modeled by a troublesome rebel who was ultimately put to death because of his teachings on love and inclusion.

Reconciliation often takes burning something away, many tries at forgiveness and empathy.

I study the shape of this poem, how the perfect window is missing a tiny piece, how the bent spines of the parentheses are turned away from each other. I think of cornerstones. I think of nonconformity, and the ways that peace-making can wear us down and build us up, again and again.

When reconciliation feels like a whisper next to our politics and headlines and I am numbed down into in-action, I remember individuals--of all belief systems--who believe that another world is possible: the members of Christian Peacemaker Teams, Combat Paper Project artists, the community at Corrymeela in N. Ireland. The list is long.
In Lent more than other seasons, I am still an exchange student in a strange land, trying to make sense of how my versions of “America” and “Christian” are so different from what much of the world assumes.

Where were you that day?...

What is your story--what is its springboard?

And how have you chosen to live since?

Becca J.R. Lachman is a Mennonite writer, auntie, and public library employee living in Athens, Ohio. Her poetry collections are The Apple Speaks and Other Acreage, and she is the editor of A Ritual to Read Together: Poems in Conversation with William Stafford.
Posted by Philip Metres at 9:38 AM