Peace to you, John Kelly 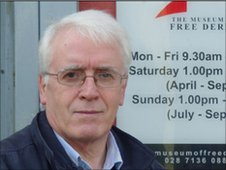 One of the eye-opening developments in the ongoing transformation of the conflict in Northern Ireland has been the journey of John Kelly, whose brother was murdered during Bloody Sunday in 1972. He's been running the Museum of Free Derry for many years.

Some years ago, when first meeting him, a colleague ( Richard Clark) asked, "you seem pretty angry. What would it take for you to forgive the British?"

He replied then: "I'll never forgive the bloody British bastards."

Two years ago, after the Saville Inquiry exonerated his brother (and all the protesters), he was elated, was joyous. And this time, a calm seemed to have descended upon him. "The main priority for me was the declaration of innocence. And once we got that there, it eased the pain of it. But now we're waiting for the next part [the criminal trial] of the process to be finished and hopefully, at the end of that process, I can walk away. And say that I done my best."
Posted by Philip Metres at 1:12 PM No comments: Links to this post

I slogged through lakes to get
beyond the highways.
Each curve turned into a situation
dying for attention and lace.
No, I can’t drink.
My words were chunks of liver,
blasted by heavenly structure
but now my voice is butter.
Without soreness,
I sing to hold god in my mouth.
Even while hearts are nailed to the fence,
I hear the cadence of each beat.
Love explodes and is tender as an infant’s shoe,
begs us to walk down the street
listen to the dead in the heavy rain,
absorb the stain of water.

Copyright 2012 Carmen Calatayud from In the Company of Spirits


First appeared in Cabin Fever: Poets at Joaquin Miller’s Cabin Anthology
Posted by Philip Metres at 11:14 AM No comments: Links to this post