But when one stronger than he attacks and overcomes him,
he takes away the armor on which he relied
and distributes the spoils.
Whoever is not with me is against me,
and whoever does not gather with me scatters.

Today’s Gospel involves Jesus’s explanation for how he got his superpower to cast out demons (God), and he uses language that George Bush used in the wake of the 9/11 attacks: “if you’re not with us, you’re against us.” I’m not a big fan of such massive and unforgiving binaries, but we should at least recall that basically Bush is comparing himself (and our nation) to Jesus. And that hubris is a tragic flaw that leads, invariably, to the hero’s downfall.

I’ve been on the road, giving talks and readings at Georgetown and George Mason, and was lucky enough to arrive at GMU the same day that the artist Michael Rakowitz, whose maternal grandparents were Iraqi Jews who emigrated to the United States in the 1940s, was giving a talk on his exhibition, “The invisible enemy should not exist.” (His work is universally powerful, and includes, incidentally, an Iraqi food truck in Chicago—go taste and see!)

The invisible enemy should not exist unfolds as an intricate narrative about the artifacts stolen from the National Museum of Iraq, Baghdad, in the aftermath of the US invasion of April 2003; the current status of their whereabouts; and the series of events surrounding the invasion, the plundering and related protagonists. The centerpiece of the project is an ongoing series of sculptures that represent an attempt to reconstruct the looted archeological artifacts…. Alluding to the implied invisibility of the museum artifacts—initial reports about their looting were inflated due to the “fog of war,” stated Museum officials—the reconstructions are made from the packaging of Middle Eastern foodstuffs and local Arabic newspapers, moments of cultural visibility found in cities across the United States. The objects were created together with a team of assistants using the University of Chicago’s Oriental Institute database, as well as information posted on Interpol’s website. This exhibition represents the incipient stage of an ongoing commitment to recuperate the over 7,000 objects that remain missing. 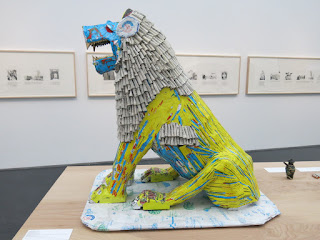 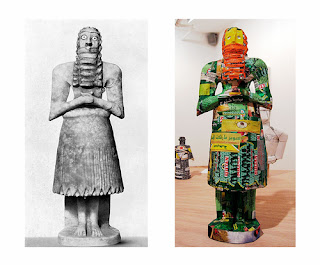 Along the outside of the objects is the narrative of Donny George Youkhanna, the former curator of the Iraq National Museum, and the person who inspired the poem that happened to be due for today: “The Iraqi Curator’s PowerPoint.” I happened to hear a lecture that he gave in Cleveland and was so shaken by his words, I began to work with them. What had happened was that, during the invasion of Baghdad by U.S. forces, the great museum was plundered—while literally down the street, U.S. soldiers had secured the oil facilities. This was no “fog of war” situation; they protected what they wanted to protect. After months of fiddling with the structure, one day on jury duty, suddenly, the poem began to form itself into a sestina, a complex and old French poetic form involving the repetition of six end words in a peculiar order, ending with a final tercet that includes all the words. I finished it, and sent it out, where it was published in the Kenyon Review Online, and then later picked up for a few anthologies. However, it was the publication in a sestina anthology, Obsession, that something about the poem finally revealed itself to me. Poet and editor Marilyn Krysl wrote to say that they were putting it in a section of experimental or fractured sestinas. I was confused, re-read the poem, and discovered, it was missing a stanza. How strange, in a poem written to commemorate the grief over the loss of Iraq’s cultural patrimony, that it would too be incomplete, fractured, broken-off.

You can see the footprints around the hole
The Iraqi Curator said.  They smashed the head
Because they could not lift it from its base,
This statue of Nike.  It’s still missing.
And this is Umma Al-Ghareb, my dig site.
The Mother of Scorpions, it means.  Y’anni,

Next slide: more damage by looters.   If the eyes
Are gems, they will be made into holes.
If the skin is gold, goodbye.  Now this is a sight:
The bodies too heavy, so they took the heads
Of these terracotta lions.  A slide is missing
Here.  What I ask you is this: base

What you believe on what you can almost see.
For example: you hear the dogs bay
From the outskirts of the city.  They head
Wherever they smell flesh.  My eyes
Still see buildings that now are holes.
What you see is not what is missing.

Next slide.  I’d heard that Etana, missing
For years, was in Damascus.  Then in Beirut.
Then, I got a call from an art friend, a whole
Continent away.  Does it have a scratch at the base
Of his hand and along his chest I said he said yes
Of course I said and it is headless

And writing on the shoulder beneath no head
And he said yes and yes the right arm missing
And I said my God I said John take my eyes
And let me see.  I was blind and now had sight
Though I could not see it.  This is the basis
Of art, sadiki.  There’s something beyond the hole

Which each must face.  Missile sites.  Army bases.
The hole in the ground where thousands climbed
Into sky.  Missing heads of state.  Eyes.

“Dialogue on His PowerPoint” by Pamela Hart

I arrange some slides: works by artists who use natural and man-made materials relating to the environment. Out-of-place trees, bark portraits, tires carved like scrimshaw. I am thinking about the Iraqi curator and how he wants me to look again. His PowerPoint features shattered statues and ancient temple sites damaged by looters. So much art is about the missing. The negative space of Smithson’s spiral jetty. Agnes Martin cutting the landscape into small empty squares. Look at what is almost there says the Iraqi curator. This story is an old story, with words that braid through time. All the armless statues. The jaspered fragment of a queen’s face. The history of loss repeats and repeats as the Iraqi curator surveys the PowerPoint’s stanzas. Missing buildings. Missing eyes. Flesh. Bodies. I fix my slides so they flow neatly from image to image. I move beyond the poem to the museum in Baghdad. I imagine the heat outside. The Iraqi curator is clicking through slides. There’s a burning smell, hums of a market place. I consider the sounds of gunfire. Click click. The curator has scooped up the stolen and disappeared and forsaken as best he could. The almost-missings of his country. He wants us to see how blind we are. He dies of a heart attack in an airport in a city to which he has fled, leaving the mislaid behind except for the PowerPoint. I scroll through my slides later. Words misplaced perhaps.

Pamela Hart is writer-in-residence at the Katonah Museum of Art where she directs an arts in education program. Her work has been published in various print and online journals. Her chapbook, The End of the Body, was published by Toadlily Press in 2006. She was inaugural Poetry Fellow at the SUNY Purchase College Writers Center in 2011. She was awarded a National Endowment for the Arts creative writing poetry fellowship in 2013. She is poetry editor and mentor for the Afghan Women’s Writing Project. For more information: http://awwproject.org/
Posted by Philip Metres at 7:46 AM

I've never forgotten Rumsfeld's remark in 2003 in which he likened seeing pictures of the looting to watching a looping video: "It's the same picture of some person walking out of some building with a vase, and you see it twenty times, and you, think, My goodness, were there that many vases in the whole country?" Talk about fog of war! A statement like that, even from the mouth of a war criminal, still remains hard to believe.


I have read that some of what was destroyed was "fake" but who's to be believed? I'm struck by the many attempts artists are making (including Syrian artists in refugee camps) to create replicas or reconstructions of originals that have been lost.

Thanks for the wonderful backstory about your poem, Phil.

Thanks for your comment--and the reminder of Rumsfeld's evil remark.