"On the Care and Feeding of One's Enemies": A Former Marine Preaching the Gospel of Nonviolence

Posted by Philip Metres at 6:21 PM No comments: Links to this post 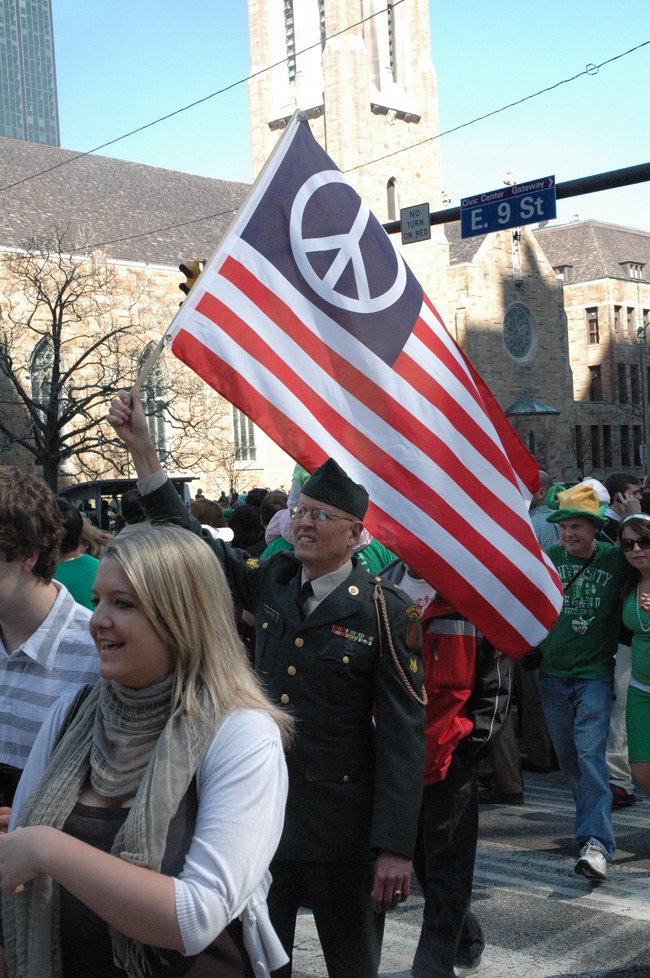 Thanks to Louis Pumphery for his brave witness for peace in Cleveland, and taking the time to write of his experience "in the belly of the beast."


Into the Belly of the Beast

I don't know about you folks, but I was absolutely incensed, infuriated, outraged and otherwise hugely pissed off when I saw today's Plain Dealer with its over-the-top puff pieces and photos covering the opening day of Marine Week in Cleveland. As Mary Powell, Jim Minnery, Lauren Sammon and others of Irish persuasion might say, I got "my Irish up," and as Peter Finch said in the movie "Network," I got "mad as hell and I'm not going to take this anymore!"

I had to postpone a dental appointment for this afternoon (boo hoo) at the Case School of Dental Medicine to take part in a peace event in downtown Cleveland that involved a public reading of Marine Major General Smedley Butler's "War is a Racket" critique of war and its corporate underpinnings.
Butler, born in 1881 and who died at the Naval Hospital in Philadelphia in 1940, had some pretty impressive street creds, not the least of which was being awarded two Congressional Medals of Honor. A year after retiring from the Marines in 1931, General Butler was a Republican candidate for the U.S. Senate.
About 20 of my fellow peaceniks showed up to take turns reading the five chapters of the late general's war critique. I did not read as I had my hands full wrestling with my peace flag that the wind thought was a spinnaker.
Here are initial thoughts of General Butler's acerbic, insightful observations:
"War is a racket. It always has been. It is possibly the oldest, easily the most profitable, surely the most vicious. It is the only one in which the profits are reckoned in dollars and the losses in lives."
Referring to World War I, Butler noted "at least 21,000 new millionaires and billionaires were made in the United States during the World War."
"How many of these war millionaires shouldered a rifle? How many of them dug a trench? How many of them knew what it meant to go hungry in a rat-infested dug-out (foxhole)? How many of them spent sleepless, frightened nights, ducking shells and shrapnel and machine gun bullets? How many of them parried a bayonet thrust of an enemy? How many of them were wounded or killed in battle?"
The public shoulders the bill of the war profiteers, General Butler noted, adding, "This bill renders a horrible accounting. Newly placed gravestones. Mangled bodies. Shattered minds. Broken hearts and homes. Economic instability. Depression and all its attendant miseries."
"For a great many years, as a soldier, I had a suspicion that war was a racket," wrote General Butler, "not until I retired to civil life did I fully realize it."
Since I was off work today at Funny Times, I left home early to catch a concert performed by the Quantico Marine Band on the southwest quadrant of Public Square before the General Butler reading. I would guess there were around 200 spectators on this gorgeously sunny day. I spent a few minutes ahead of time thinking about just when to unfurl my peace flag. If I had done it immediately upon arriving at the quadrant, my message would have boomeranged enormously, totally disrupting and ruining the event for spectators and possibly resulting in resounding boos, name-calling, me being beaten senseless, castration and tarring and feathering. Well, maybe not the last two possibilities. Maybe.
Desiring to witness at least one more sunrise replete with the family jewels, I opted, instead, to chat up a Marine sergeant before the concert started. He hailed from Owensboro, KY. I asked if he had been overseas and he said he served in Hawaii. I said, "Good for you. Not too many battles there." He said he took part in Marine public relations events in far eastern countries, including Thailand, but has not had any combat deployments.
I told him I enjoyed talking with him and shook his hand. I then walked to a place on the quadrant's sun-drenched plaza, a roughly-circular area surrounded by the spectators and the Marine band. I talked for a few minutes with a friendly Marine veteran closer to my age. The concert began at 11:30 and was to last until a little after noon.
The bandleader asked veterans in the audience to stand as the band played each march associated with all the branches of the military: Army, Navy, Air Force, Coast Guard and Marines. The bandleader looked toward the uniformed yours truly and I raised my hand in thanks for the band playing the Army's "theme song", "The Caissons Go Rolling Along." I was the only veteran in the crowd in full uniform.
I kept checking my watch throughout the concert, since I wanted to leave shortly after noon to make the General Butler reading by 12:30, a few blocks away. As High Noon approached, I admit getting rather nervous--sorta like Gary Cooper, in, well "High Noon." Here I was surrounded by folks who likely would consider a peace flag as appealing as Jane Fonda. I started to identify myself with Christians centuries ago in the Roman Colosseum's arena who were about to experience a rather rude introduction to lions.
I missed the band's final song. After the bandleader announced that song and turned toward the band, I turned around, unfurled my peace flag and said to the small group of folks I had to walk through, "Take care everyone. Life is fragile."
No one said a word. I think they were in shock, including a Cleveland policeman standing nearby.
End of Part Deux. 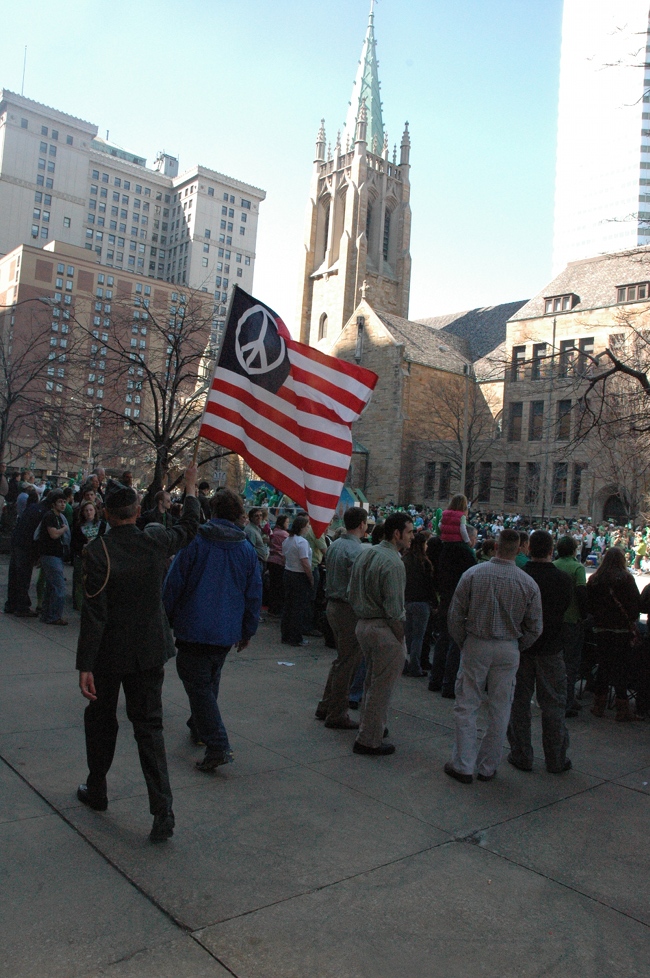 Posted by Philip Metres at 1:46 PM No comments: Links to this post

Public Reading of Smedley Butler's "War is a Racket"

There will be a special event PUBLIC reading of USMC Major General Smedley Butler's book War is a Racket during 'Marine Week' as follows:

Special Event During Marine Week in Cleveland
Public Reading of Marine Major General Smedley Butler's prophetic work
WAR IS A RACKET
Thursday, June 14 / 12:30 pm
@ the Free Stamp
Lakeside and E. 9th St., Cleveland
In the event you cannot attend, here is the link for the book, perhaps you can read it at home in solidarity with us.

Posted by Philip Metres at 5:24 PM No comments: Links to this post

Split This Rock Poem of the Week


Posted by Philip Metres at 8:36 AM No comments: Links to this post

"Loss is an art, traversing one world to the next" by Purvi Shah


Posted by Philip Metres at 4:44 PM No comments: Links to this post


Mark Nowak is nothing short of my contemporary poetry hero.  Having worked in autobiographical lyric modes in his lovely first book, Revenants, he has embarked upon increasingly experimental poetry practices, employing radical jumpcuts, documentary collage, and a widening vision of poetry as a social force capable of telling individual stories at the same time as acting as a kind of social critique.

His Coal Mountain Elementary, which tells a story of the Sago Mine disaster and the plight of miners worldwide (especially in contemporary China), was even staged as a play.  The elegiac cast to his work--for example, in CME and even in his Ford Plant poetry dialogues--always had an embedded politics to it, but he's been working hard to create a social poetry that leans forward, and that empowers people to get their voices and stories heard.

His recent project, working in writing workshops with Domestic Workers United, has activated the possibility of poetry as a story-telling arm of a wider global rights movement for domestic workers, whose rights are not protected and are vulnerable to abuse by employers.  Think of it: poetry as empowering not only for individuals to come to terms with the truths of their lives and to express it to themselves and others, but also for creating dialogue with others coming to terms with their truths, adding their voices into a chorus that calls for structural change, for dignity and rights, for justice.

These videos represent the first steps in that work.  I look forward to his next steps, and hope that more poets would use this model of the workshop, to bring poetry outside of the halls of academia, and into the places where people live and work.


Posted by Philip Metres at 10:50 AM No comments: Links to this post


“Dealing Effectively With Iran Without War”, Featuring Peter Beinart and Jamal Abdi (bios below)
Moderated by Brian Amkraut, Provost of The Siegal College of Judaic Studies

Over many years, the US and Iran have been unable to negotiate a mutually secure peace agreement, especially on the nuclear issue. Many questions surround the looming difficult choices: further sanctions, more effective negotiations or war.

Would an attack on Iranian nuclear facilities by Israel derail, delay, or motivate Iran’s nuclear program, and what could be the long-term consequences for Israel, the U.S., and relations between the two countries? Many American and Israeli military and intelligence experts believe that war is impractical and not in the best interest of Israel or the United States. If so, what are achievable endpoints and what kind of sanctions or negotiations would provide verifiable and sustainable security for Israel and the U.S. in a reasonable time frame?

These and other related questions will be discussed at Cleveland Peace Action’s unique and insightful program, “Dealing Effectively with Iran Without War”, featuring a dialogue between Peter Beinart and Jamal Abdi, moderated by Brian Amkraut.

An unusual feature of this program is its goal of engaging the interested Cleveland Jewish community as well as all others in learning about and evaluating the different choices.

Peter Beinart is an Assoc. Professor of Journalism and Political Science at City University in New York, editor of the Daily Beast blog, “Open Zion” and contributor to The New York Times, Slate and Die Zeit. He has appeared on “Meet the Press”, “The McLaughlin Group” and “The Colbert Report”. His latest book, “The Crisis of Zionism” was published in 2012.


Jamal Abdi is the Policy Director for the National Iranian American Council. Abdi joined NIAC
following his work in the U.S. Congress where he was a Policy Advisor to Rep. Brian Baird. He served as a congressional liaison and expert on foreign affairs, immigration and defense. He is a frequent
contributor to The Huffington Post, The Hill and Public Service Europe as well as NPR and BBC Radio.