Jesus said to his disciples…
This is how you are to pray:

Our Father who art in heaven,
hallowed be thy name,
thy Kingdom come,
thy will be done,
on earth as it is in heaven.
Give us this day our daily bread;
and forgive us our trespasses,
as we forgive those who trespass against us;
and lead us not into temptation,
but deliver us from evil.
--Matthew, 6:7-15 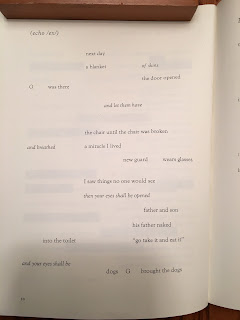 I’ve struggled with what is called “The Lord’s Prayer” or the “Our Father” even as I’ve prayed it, thousands of times, in boredom or fear, sadness or joy. I’ve thought: why “Father,” if God is beyond all human reckoning? Could we not equally say “Our Mother”? And why “in heaven” and not on earth? What of the incarnate Word, of creation as a God’s? I suppose the notion of the Kingdom on earth is supposed to allude to that. I’m on board with “daily bread,” though I’m sure the gluten-free among us would get itchy just from the sound of it. The importance of forgiveness, and the mutuality of forgiveness, seems crucial, though why we’ve translated it as “trespass” requires more explanation. Perhaps my favorite moment is the “but” in the final line; it suggests that temptation may be inevitable, and we may need delivery from evil—that we do, as much as that is done to us.

Today’s poem from Sand Opera, in the voice of one of the abused at Abu Ghraib, testifies to the problem of evil and the miracle of survival. That despite the depradations he faced, he lived. His voice, in the telling, is delivering himself from the evil that he survived. But G, the ubiquitous anti-God Charles Graner, brings “the dogs,” and the dogs are what end the poem. Dogs were one of the instruments of torture used by military police, which is doubly sad given how much comfort that a good dog can provide. Which is why I’m sharing Arab American poet Hayan Charara’s amazing poem “Animals,” from his new book Something Sinister (2016), about his own beloved animals, and the animals his brother cared for in Lebanon when Israel attacked in 2006. The animals that we become to each other.

The phone call, from my wife.
She’s hungry, she’s pregnant,
someone kicked her

in the stomach—we have to.
I say yes, but the reply
I keep to myself is,

We don’t have to do a goddamn thing.
A dog. I’m talking about a dog
I would have otherwise left to starve.

Now though, five years since,
I love this animal, Lucy,
more than I can most people.

A boy names his dog and five cats
after our Lucy. The boy, my brother,
born in Henry Ford’s hometown,

lives now in Lebanon,
which the Greeks called Phoenicia,
and they tried but failed

to subdue it, same as the Egyptians,
Hittites, Assyrians, Babylonians,
Alexander the Great, Romans, Arabs,

Crusaders, Turks, the British,
the French, the Israelis.
There, my father built a house

with money earned in Detroit—
as a grocer, with social security.
Also there, the first alphabet

to go back for Lucy,
the dog. As for the cats,
No. They take care of themselves.

One week into it
he wonders who feeds them,
who fills the water bowls.

Maybe the neighbors,
the mother thinks out loud.
The father is indignant: Neighbors—

what neighbors? They’re gone.
The mother is stunned:
What do you mean, gone?

After a month, everyone forgets
or just stops talking about
the animals. During the ceasefire

my father drives south,
a thirty-minute trip that lasts
six hours—wreckage upon wreckage

piled on the roads, on what is left
of the roads. The landscape
entirely gray, so catastrophic

he asks a passerby how far
to his town and is told,
You’re in it.

My father finds three of the cats,
all perforated, one headless.
The dog is near the carport,

where it hid during lightning storms,
its torso splayed in half
like meat on a slab, its entrails

eaten by other dogs
scavenging on the streets.
Look. They’re animals.

Which is to say, there are also people.
And I haven’t even begun telling you
what was done to them.

Posted by Philip Metres at 8:18 AM

After reading these juxtapositions of animals and war, I was reminded of one more. My father was a teenager living in the Netherlands during World War II. He wrote the story of his life for his family and shared his experience of the war. On the day that the Germans invaded Holland in May 1940, his family had to flee from their farm in Venhorst to another town Keldonk, that was out of the line of fire. The next day he went back to see what had become of their farm animals. Here is his description:

"I don't know who decided but that afternoon John van Kessel, who was 13 years old, and I, who was 15, went back to Venhorst to see how everything was. We went back by bicycle. Some places we had to use the same road going east as the German army used going west. My dad warned us to watch whether the road near our farm was mined (a minefield crossed our farm, but the road was still open.) Well, our farm was burned down, the hogs killed, and the chickens outside, including 300 1-week-old chicks, who were still keeping warm by the hot bricks. We moved them into the neighbor's chicken coop and got a stove going. We slept on the floor with the chickens that night and went back to Keldonk the next morning."

Phil, I appreciate the stimulus you offer us to form new connections between all these images and to simply be with these experiences.

What a great story! I have not had creature-comfort for most of my life, but now that I have a dog, I feel like I understand that sense of caretaking for creatures, how you'd risk your life to make sure that they were okay.