"Weaving a Web" from The Unpredictability of Light by Marguerite Bouvard 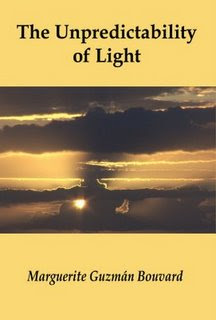 I recently read The Unpredictability of Light (2009) by Marguerite Bouvard, a poet and scholar whose work has included a broad range of subjects, from confronting chronic illness to chronicling women's activism in the Third World. In the constant shifting wonder that is the Internet, I've found myself in touch with people who for reasons of illness or geographical distance I would never have met; Marguerite is one such connection.

Her book of poems is a clear-sighted yet tender exploration of human violence and betrayal, balanced against our longings and rituals to make peace. From the first section of poems, "The World That Flames Around Us," where wars, violence, and human misery predominate, to the latter sections, "The Hymn Beginning and Ending with Our Naked Flesh" and "View from the Future," Bouvard moves into the pleasures of sensual being, the solaces of nature, grandchildren, and life after life. Here's one of the poems, "Weaving a Web," from the first section, that establishes her sense of connection to the wars both near and far.

WEAVING A WEB by Marguerite Bouvard


A spider is working diligently before me
this Sunday morning. Long silken threads stretch
from its mouth, waving in each gust of air.
It’s like the game of hide and seek where
only a burst of unexpected light reveals the intricate,
ever changing pattern. It’s skill is in
its invisibility so that we can walk
through our morning without seeing
its handwork as we turn our attention
to the World Cup soccer match. Meanwhile
Iman Abou Omar is snatched from the sidewalk
as he walks home from his mosque in Milan,
vanished in the web that stretches
from Cairo to Amman, to Timisoara, Kabul,
Islamabad and Guantanamo. No one ever
sees this network of secret renditions
and detentions, an underworld
that pulses beneath our secured houses:
thousands hurled outside of time.


One of the things that fascinated me about this poem was that I discovered an early draft of the piece online, which elaborates on one of her secret themes--the forgetting of history--those stories that connect and anchor us to whatever we call home. Here's the way the original version ends:

thousands hooded, naked and hurled outside of time.
I remember meeting a young German in the early 70s
when the history books were still cleansed.
I asked him about Auschwitz, Buchenwald,
and Dora Nordhausen. He looked at me
bewildered, answering What Camps?

In some sense, what Bouvard proposes is that, contrary to the idea of literary immortality (another form of being "hurled outside of time"), we need ways of imbricating ourselves in our time, to know our (collective) moment. In this sense, it is part of that globalist poetic that I wrote about in relation to "Children of Men."
Posted by Philip Metres at 8:06 AM

I am fascinated by your idea of a “Globalist Poetic.” I write poetry in what I term an “Evolutionary Poetic.” The term comes from a Dr. Martin Luther King, Jr., quote: “Gandhi was inevitable. If humanity is to progress, Gandhi is inescapable. He lived, thought and acted, inspired by the vision of humanity evolving toward a world of peace and harmony.” It is this idea of the evolution of our humanity that informs my poetic. Here is an example sonnet:


Mohandas Gandhi, Martin Luther King,
Mandela, Tutu, Mother Teresa, all
Of history’s Great Souls, their songs I sing.
Yes, there are more in this my heroes’ hall;
There are names of fame and names of those whose lives
Are less well known. For all, I praise in song.
Because of them, the evolution thrives!
Because of them, we are a mighty throng!
They’ve shown that each of us can be Great Souls
If each of us would raise our fellow man
And serve a cause of just and noble goals.
They’ve shown agape love the world can span.
I’ll celebrate their lives and sing their deeds
For more heroes like them our evolution needs.

My poems celebrate humanity’s heroes (as opposed to national heroes). In that, I don’t think our two poetics are dissimilar. But I would like to know more of your thoughts.