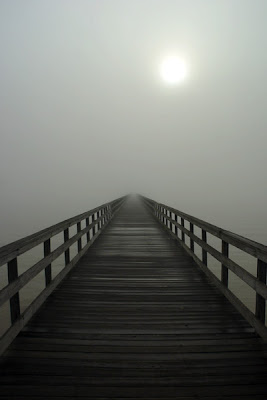 I've been thinking of the delusions that we each have, how we each think we have some kind of clarity of perspective, and came upon this quote from Jeff Gundy's Walker in the Fog:

"Like a man traveling in foggy weather, those at some distance before him on the road he sees wrapped up in the fog, as well as those behind him, and also the people in the fields on each side, but near him all appears clear, though in truth he is as much in the fog as any of them."

Great insight, Phil. You would think this truth would lead us to more humility, both personal and public. Rather, it seems to lead us to claim the truth with greater and greater volume. I'm more and more convinced that humility, uncertainty, is a deep human value. Beautiful photograph too.

Joseph, thanks for checking in, and I hope that we'll be meeting in person in 2010 at STR!