Poets for Palestine now out 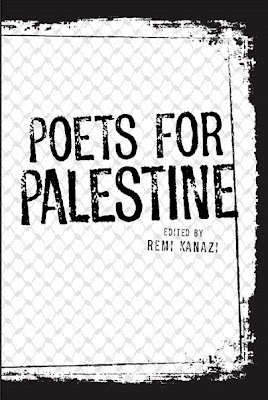 Poets for Palestine (2008), edited by Remi Kanazi, an anthology of poetry and art featuring poems by poets such as Hayan Charara, Mahmoud Darwish, Marilyn Hacker, Pierre Joris, Fady Joudah, Naomi Shihab Nye, Deema Shehabi, and many others, is now available online for purchase.

Kanazi gathers poets of multiple generations and backgrounds (many of whom are Palestinian or Arab American) hailing from multiple poetic traditions (from the page-based to the more performance-oriented), and sets these voices alongside the visions of Palestinian artists, attempting to the stories of Palestine from the inside-out. While I may quibble with a poem here or there (for reasons of rhetoric or presentation), there are a number of arresting works that deserve (and hold up to) multiple re-readings--and is a good addition to other recent anthologies, such as We Begin Here and Inclined to Speak.

In the title to this blog review, I wrote "Poets for Palestine now out" for its dual meaning--that is, all of the poets are "out" in the sense of their advocacy for Palestine and Palestinians--an advocacy that marks them (and here, I'll come out to say "us") as supporters of human rights and national self-determination of the Palestinian people. Why, in this day and age, this should still be controversial would involve a much longer essay--and yet, it gets to the heart of why the conflict in the Middle East continues.

Thomas Friedman--no radical himself--once noted that the very existence of Palestinians as such is taken as an existential threat to Israelis and Israel. That there even exists a co-claimant to the land--people whose ownership and relationship to the land predates many of its current inhabitants--opens the question of Israel as much as it does the question of Palestine.

In one of the poems in the anthology, "Installation/Occupation," I've retold the anecdote of an artist, Vera Tamari, about the cultural siege under which Palestinians have lived since 1948 and 1967, and the ways in which the simplest acts of patriotic feeling (painting the colors of the flag in a work of art) were forbidden by Israeli officials. What this poem--and Tamari herself--come to embrace is a new identity which admits fracture, which embraces a certain co-creation.

In this way, perhaps (and here I don't want to be misunderstood as understating the tragic and terrifying de-creation that this poem relates), it offers a tentative model not only of cultural survival, but of identity-formation that is open to encounter with and alteration by otherness, even when that encounter is violent.

Posted by Philip Metres at 1:59 PM

I ordered Poets for Palestine back in early August. Any idea when it might be shipped?

Hey Tyrone, I got my copy last week, so I believe they're only now just shipping the backorders. If you're worried, I'm sure Remi would help you out at
poets4palestine@gmail.com