The prophet sent him the message:
“Go and wash seven times in the Jordan,
and your flesh will heal, and you will be clean.”
--2 Kings

Happy Leap Day! We’re heading back to the Recipe poem from yesterday, and to share also the text that was its original inspiration, which comes from Nawal Nasrallah’s Delights from the Garden of Eden. Although Lent is a fast time, Nawal’s work reminds us of the centrality of food as nurturing, as healing (like the waters of Jordan), as care for the soul. She even wrote a post on her blog about Lenten dishes in the Middle East! See here: http://nawalcooking.blogspot.com/2014/04/lent-dishes-from-caliphs-kitchens-to.html 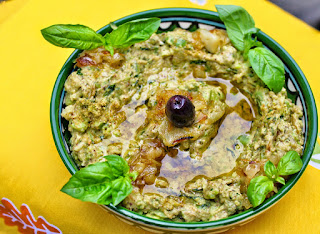 Amy and I have been honored to eat at her table (the subject of tomorrow’s post). One simple thing you can do for an Iraqi today is buy her amazing cookbook! It can also be purchased here at iTunes: https://itunes.apple.com/us/book/delights-from-garden-eden/id1084418702?ls=1&mt=11 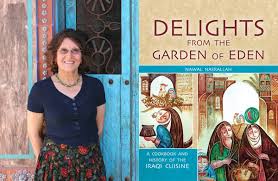 Recipe from the Abbasid
Skin & clean a fat, young sheep & open it
like a door, a port city hosting overseas guests

& remove its stomach. In its interior, place
surveyors in exploratory khaki, a stuffed goose

& in the goose’s belly, a stuffed hen, & in the hen,
machine gun nests, C rations, grenades, a stuffed

pigeon, & in the pigeon’s belly, a stuffed thrush,
& in the thrush’s belly, contractual negotiations

& subtle threats, all sprinkled with sauce. Sew the slit
into a smile, dispatch handshakes. Add Chevron,

Exxon, Texaco, Shell. Place the sheep in the oven
& leave until this black slimy stuff, excretion

of the earth’s body, is crispy on the outside
& ready for presentation.

Here is a recipe of a royal dish, which I found in 13th-century anonymous cookbook Anwa’ al-Saydala fi Alwan al-At’ima (A Compendium of Dishes and their Health Benefits) of Muslim Spain, which was greatly influenced by the haute cuisine of Baghdad during the Abbasid period. The recipe gives directions on how to prepare a stuffed calf.

Take a fat young male sheep, skin and clean it, then make a small opening between the thighs, and carefully empty the cavity. Next, insert a grilled goose, and stuff the goose with grilled chicken. Inside the chicken, put a young pigeon, in the pigeon's belly put a grilled starling (zurzour), and inside the starling put a grilled or fried sparrow (‘usfour). So all these you put inside each other, all grilled and basted with the sauce [mix of murri ‘fermented sauce,’ olive oil, and thyme].
Now sew closed the stuffed sheep, and roast it in a preheated tannour oven until browned. Baste it with the above mentioned sauce, and stuff it in the cavity of a cleaned and prepared calf. Sew closed the calf, and let it roast in a preheated tannour oven until browned. Take it out and serve it. Intaha (that’s it).

If you think that the medieval gourmets with their cooks went a bit too wild, then listen to this: It seems that the trend of stuffing poultry with poultry is the latest gourmet fad in the United States of nowadays. The dish is called "Turducken." It is a Thanksgiving turkey stuffed with a duck, which in turn is stuffed with a stuffed chicken. The trend came from the south where there is a long tradition of stuffing a bird with a bird. What brought this to the attention of people was a Wall Street Journal article in 1996 just before Thanksgiving, featuring a company that prepares turduckens. Immediately after that, we are told, the company received 10,000 orders a day, and the company sold 25,000 turduckens for Thanksgiving. Devotees think its taste just blows your mind, skeptics think the idea is disgusting, and paranoids think it is a bacterial contamination nightmare. What do you think?

We all rushed at the Pied Piper summons,
Promising a feast like no other.
A roasted lamb, falling off the bones,
Mightily stuffed with goose, a hen, a pigeon, and a thrush,
Succulent with dripping sauces.
You shall be intrigued, he promised.
The crowds, the confusion, the deafening drums, we all descended,
whether we believed in it or not. The path was steep.
What is this stench? That “black slimy stuff?”
He said that’s the earth’s body, friends, “crispy on the outside, and ready” to eat.
That’s your feast. Dig in!
And the feast, dear fellows, was shoved down our throats that day.
In zero health.

How times have changed.
Wasn’t it like a thousand years or so ago,
When the Pied Piper summoned us back then
Promising a feast like no other?
You shall be intrigued, he promised.
There awaits you guys, including ye party crashers,
The stuffed, the hidden, the buried, the shrouded, the suffocated, you name it.
And we followed, clamoring with the music of drums and tambourines.
There were those though who stayed behind, for they were suspicious of names.
But we who made it there, were indeed intrigued,
The stuffed eggplants, misleading the eaters with their perfect shape,
As if nothing has been done to them,
The meatballs with egg yolks hidden inside,
The stuffed zucchini buried in sweet and sour sauce,
The pastry rolls shrouded in sheets of dough,
The kunafa noodles suffocated with syrup,
And the crown jewel of all stuffed dishes, a grilled lamb in a roasted calf hidden.
Inside the sheep, a goose stuffed with a grilled chicken,
Inside the chicken, a pigeon, with a starling stuffed,
Inside which a sparrow hidden.
All oozing with succulent delight.
And coxed by the Abbasid epicure al-Baghdadi’s sermon on the pleasures of food,
We did indeed enjoy the feast in two healths, back then,
How times have changed.

The knock comes just like the buzzing
drone on its second, inevitable round,
just like the starlings in Irbil’s winter

The cell door opens to dogs, their entry
held fast as fear rises same as adrenaline
in the bodies of two remote-controllers

surveying same as the farmers zeroed in
on the mob of birds, some to be seasoned
for Baghdadi tables, some soon set free.

Fear in the cell smells no less than fire
on the ground, each strike as sure of effect
as the separated skin of the skewered birds.

To think of food and its miraculous effects is one way to make war and carnage less intimidating. Perhaps this is what the abbasids did after 1258, the year Baghdad was destroyed by the Mogols.

Thanks for sharing the poem!

Everyone has to eat!

Agreed! Thanks to all for the comments.