Why the cancellation of the Gaza Children's Art exhibit matters 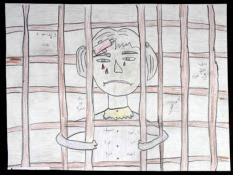 It is a small matter, the cancellation of the Gaza Children's Art exhibit at the Oakland Museum of Children's Art due to outside pressure, but for the fact that it repeats a sort of social trauma experienced by Palestinians since the founding of the state of Israel--that their very experience, their reality, their identity, their rights, their humanity, their desire for recognition are refused, excised, suppressed, ignored.

As the PLO has embarked upon an effort to gain U.N. recognition of a Palestinian state around this time--itself a more "important" political matter, one which Palestinians themselves are fiercely debating--and as the U.S. continues to discourage such attempts (partly in the fear that it will lose whatever sway it has in the region, in a player in the now long-moribund "peace process)--it seems useful to pay attention to why such small things matter, and why the PLO might engineer what is really such a small and desperately symbolic move, one that risks the loss of Right of Return for Palestinian refugees from 1948.

The exhibit, organized by the Middle East Children's Alliance, depicts the horror of war experienced through the eyes of Palestinian children. According to the article in the San Francisco Chronicle,

"Our aim, as with all exhibits, is to foster insight and understanding," Sorey said in a statement. "However, upon further review and engagement with the community, it became clear that this exhibit was not appropriate for an open gallery accessible by all children."

Yet it wouldn't have been the first time the museum has featured wartime art by children.

In 2007, it exhibited paintings made during World War II by American children in the Kaiser shipyard child care center. The art featured images of Hitler, burning airplanes, sinking battleships, empty houses and a sad girl next to a Star of David.

In 2004, art by Iraqi children hung on the museum's walls. The pictures, made shortly after the U.S. invasion, included a picture of a helicopter shooting into a field of flowers.

The art by the Palestinian children was similar in content.

In one colorful picture, a row of buildings burns as five tanks move through the area. In the foreground, women and children are crying as are trees and the sun. What looks like a small, abandoned teddy bear lies face up in the street.

In a simpler image, a frowning girl with a bandage on her forehead faces out from behind prison bars.


There is little doubt that the exhibit is politically-motivated, but it's not necessarily merely "political," in the sense of partisan--i.e. "Israel-bashing." It's motivated by people who want to see Palestinians as human beings, whose stories have not been told, or have been so distorted as to make them seem irrelevant. But that's the trouble. Every time that Palestinians want to tell their story, it's seen as an existential threat, or a device for shaming pro-Israeli people.

Ziad Abbas expresses that feeling of silencing in this way (not without a dollop of shaming!). This is from the Chronicle piece: "Even while the children in Gaza are living under Israeli policies that deprive them of every basic necessity, they managed through art, to express their realities and hopes. It’s really very sad that there are people in the U.S. silencing them and shredding their dreams,” said Ziad Abbas, MECA’s Associate Director.

A colleague I respect wondered whether the exhibit could have displayed art by Israeli children who also have experienced trauma from violence--to demonstrate that all children suffer from conflict. It's actually an interesting possibility, and one could imagine an exhibition which would bring those children together for an opening--one that would need to involve a lot of peacebuilding preparation and support, to move into further dialogue.

And yet--and this is what I wrote in reply, the level of trauma in Palestinian children is so devastating, it deserves its own stage. Studies have been done that show Pal children with levels of PTSD ranking moderate to severe... at 90%. Israeli children, of course, particularly in zones of vulnerability/conflict (settlements, border, Jerusalem) also suffer from levels of PTSD, though they are much considerably lower. Actually, my understanding is that most people in Israel live as if there is no problem at all; the Wall has solved everything. I say this even though I'm believe that comparing suffering is always a dangerous and politically blindered game. Suffering is always suffering, and children's suffering an atrocity.

I don't have the answers to this conflict, but something needs to change. And soon.

I am truly disgusted and sickened.

When I visited South Africa in the 1990s, my son, then in second grade, was with me and my husband. After a day safari, back at the camp, my son played with black S.African children, swam with them, sat and had lunch with them. I was asked several times how I could possibly think to allow that. My response was that my son knows nothing about the color of other children's skin; what he knows is the joy of having fun with other children. I offer this as example of what is possible when we make conscious effort to not teach discrimination and political prejudice and disregard for other human beings. Children don't see skin color unless they're taught to; they don't know to feel they are lesser unless they are made to feel so; they don't grow up wanting to kill unless they're shown violence as the only way of life.

What is the message for these children? I needn't respond with what is the obvious answer.

Art has been shown time and again to have therapeutic value, especially among children who daily suffer simply through no fault of their own. That we are now politicizing its use among children is outrageous.

I truly despair for our world when we reach the point that we have no qualms about using children for political reasons, that the suffering of one group of children holds more "value" than the suffering of another. Dangerous, indeed!

Maureen, thanks for sharing that story; the level of separation is, of course, distressing and echoes other attempts to separate.

RE: the issue of politics. The difficulty is that politics are so imbricated in daily life that everything Palestinians do is branded as "political"; there was an American novel called "Martyr's Crossing" that dramatized how every act becomes almost instantly politicized.