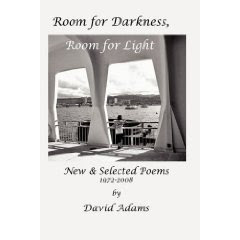 My friend, the poet David Adams, recently published his selected poems, Room for Darkness, Room for Light: New & Selected Poems, 1972-2008, a book resonant with sounding dark and brimming with quiet light. I met David some years ago at a conference on Jarrell, Bishop, Lowell & Co., and we can hear echoes of Jarrell in Adams' empathic dramatic monologues, Bishop in his attention to the natural world, and Lowell in his worldliness and political acuity.

All three of these poetic legacies (and more) weave their way into a recent poem from the book, "Bikini," instigated by Adams' travels to the Marshall Islands on business. For those who remember, the island of Bikini was a ground zero in the nuclear age, a site of practice explosion that led to the displacement of its inhabitants and subsequent exposure to radiation.

On youtube, if you type in "Bikini Island," you also get this sort of thing:


How quickly we move from memory to forgetting, from destruction to eros. There is something about the U.S. legacy in the islands that is manifested in the relationship between these two videos. Here is David's poem, and note its own faux-postcard ending--the dream of a past that may or may not have existed, and now only does as virtual memory.

It’s out there, somewhere towards evening,
with small waves lapping at the coral sand.
So a stranger comes to Majuro and watches
as the clouds conform to an ageless dream.
He whispers that they seem “the breath of God,”
which is to say they might be anything.

If you listen, you can hear the trade winds
tell the story. God gave us this place
to be our home. It became the home of death.
This, too, is our history. First we called it
Crossroads, then we called it Castle,
when the islands woke to a double sun.
Bikini, where we buried so many things:
Nagato, Saratoga, some goats, the lies
beneath the lies in the gray rehearsals
of the newsreels, the bland assurances.
And more than half the world’s supply of film.
And the hundreds of Bikini
not a fraction in the scheme of things.

You would have thought by then
the world would know that with a God
you must have something in between―
a little wave, a nautilus, a storm,
some birds slanting above the currents.
But even here there was a brother like a wolf
who built his gift of ironwood to drown.

It’s out there, somewhere towards evening,
the clouds swollen with the faces of removal:
Strauss, LeMay and Forrestal, these friends
of someone else’s reasons. They said they needed
to drop the bomb to find out what would happen.
So go to Rongerik and starve. Go to Kili and starve.
Try living with the spirits of the dead.

When can we all go home? When we have waited
long enough to forget everything we knew.
There is a girl walking in flowered silk,
carrying a basket of fish with one arm,
hibiscus woven in her hair. She is walking
beneath a line of palms with perfect shadows.
She is long dead now; she is still perfect,
even her shadow, even her smile.

thanks for posting this poem of David's, which manages to juxtapose the colossal callousness and disregard for the "other" that still characterizes Western imperialism with the voices of those others and their claims with only the slightest sarcasm and sentimentality--a great balancing act. And thanks for showing that terrific cover, the photo taken by David.