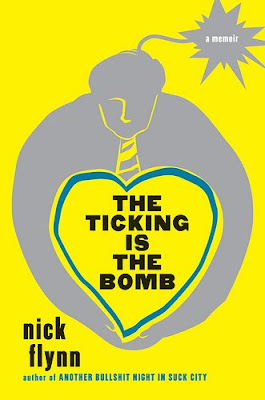 Nick Flynn's newest memoir, The Ticking is the Bomb, deftly weaves personal and national stories as he grapples with his impending fatherhood, right in the middle of the terror wars. The blurbs call it "searing" and "dazzling," but to me, the book feels poignant and earnest--in a good way. We feel the writer searching around in himself to explain his bewilderment in a bewildering world where parenthood and torture chambers slip in and out of our consciousness.

I loved his angry critique of Errol Morris' film Standard Operating Procedure and Philip Gourevitch's The Ballad of Abu Ghraib, each of which fails to move outside of the frame of the soldiers' narratives of what happened at that benighted prison. Flynn dramatizes his feelings of complicity so effectively when, in a scene in a Turkish hotel, one of the abused Iraqis is asked to describe what his torturers looked like:

"What did the person who tortured you look like, was the next question, and the detainee would look at me, then look at the artist, the only two white men in the room, and either point to him, or point to me--He looked like him, was the answer."

Although I occasionally wanted Flynn to settle into the story, instead of skittering off into another realm, the fragmented structure of the book dramatizes his own fear of settling down--that sense of wildness that cannot be becalmed.

Still, I wept when I read about the trip he took with his step-father, a veteran of the Vietname War, back to Vietnam. At the My Lai museum site, the step-father Travis met a woman who as a child had survived the massacre:

"I watched Travis walk up, say something for the translator to translate. I watched him kneel down before this woman, still seated on the grass, take her hand, kiss it, ask her to forgive him, to forgive America."
Posted by Philip Metres at 1:54 PM