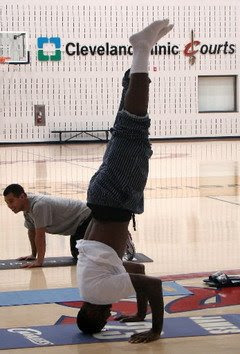 I'm crazy about yoga, partly because it's made my basketball game better (my apologies to the true yogis, who would find such thinking counter to the principles. Sorry, guys). Turns out I'm not the only one--our Cleveland Demigod, LeBron James, is also a yoga nut. Any poets out there who are yoga mad?

CLEVELAND -- Over the last year, hotel guests in various NBA cities have likely been a little jolted to see the Cavaliers' LeBron James out by the pool in the mornings. Not so much because he's a celebrity, but because he just might be standing on his head.

When James first came into the NBA at the age of 18 he didn't even tape his ankles, sometimes ate McDonald's an hour before tipoff and his main use for ice was cooling beverages.

As he's matured, part out of necessity and part out of pride, he's serious about preparing and maintaining his body for the rigors of an NBA season. That includes a wide range of measures from diet and recovery techniques to the Vajrasana, Virasana and the particularly stunning Salamba Sarvangasana.

They are yoga poses and they are also an essential part of James' routine every week.

"Yoga isn't just about the body, it's also about the mind and it's a technique that has really helped me," James said. "You do have to focus because there's some positions that can really hurt you at times if you aren't focused and breathing right."

From the "thunderbolt pose" to the "hero pose" to even "downward facing dog," James has become a devout believer in the benefits of yoga. He and assistant athletic trainer Mike Mancias have been developing a regimen over the last two years.

James got serious last summer when Mancias was with him for much of the Team USA events in Las Vegas and China. During the season, they carve out time at least once a week and sometimes more for the practice. Often it happens at team hotels on the road and the two prefer to do it outside if possible. The two also do some pilates exercises.

"He tries to focus on things that will help him and that the body needs, especially for balance and to strengthen his core," said Mancias, who is in his fifth year with the Cavs.

Dana Bail/Cavaliers photoIt can be a topsy-turvy world in the NBA, but James has plenty of practice at keeping his balance, regardless of where he finds himself.

"Yoga is an activity that encompasses all that. It's total body and it helps him mentally, too. Flexibility is important to him and we've tried to incorporate all of that into a routine."

Basketball players have been experimenting with yoga for decades. Kareem Abdul-Jabbar was perhaps the first high-profile player to embrace it. In recent years, Shaquille O'Neal has used it at times to increase flexibility in his legs. Phil Jackson, who is famous for his alternative techniques, used it as a player to help with back problems and had the Bulls go through a series of yoga classes throughout the 1997-98 championship season.

The theory is that basketball players tend to be strong in certain areas, such as the legs and arms, due to the nature of the game. But all the repetitive motion can build up tension and limit flexibility in some joints and large muscles.

James started getting into the importance of stretching during his third season. Partially inspired by then-teammate Alan Henderson -- who extended his 12-year career by using elastic bands and a large inflatable ball in a stretching routine -- James began to devote himself to making sure he was limber.

At the time he was also bothered by some lower back spasms, which nearly forced him out of a playoff game against the Wizards in 2006. That and a couple of nasty ankle sprains got James focused on doing things to maximize his physical tools. Stretching with bands after practices and games slowly developed into using yoga.

The positions increase flexibility in areas athletes don't always pay attention to but basketball players need. Such as ankles, shoulders and hips. Fans can surely remember times when James appeared to have suffered serious ankle injuries only to shake them off. Some of that may be due to the freakish size of James' joints, but some of it may be from those targeted workouts.

Two weeks ago, for example, he flipped backwards over his neck chasing a loose ball in Phoenix. It looked like he may have hurt himself doing it, but in reality it was sort of like the Salamba Sarvangasana, or shoulder stand, he'd worked on a day before.

"It is something that really can help your balance," James said. "I had some lower back problems a few years ago and once I started to do the yoga, it has helped them go away for now. Of course we can stretch but stretching only goes so far."

It's part of a package James now employs. He gets massages on most game days, gets his ankles heavily taped and wears a padded vest under his jersey to protect his ribs, and ices his feet and lower back after every game and contact workout. It includes an overall better series of eating habits and weight training, which James is now more devoted to than ever.

"People don't see everything that he does, he's focused on doing everything for his body that will help him succeed," Mancias said. "The proof is what he's been showing on the court."

Recently James held a special event for some students from Holy Cross Elementary in Euclid at the Cleveland Clinic Courts to promote yoga and its benefits. At first he seemed a little shy in talking about yoga; brute athletes in the past have not always been lauded for work with such finesse arts.

But as James has experienced the benefits, he's become an advocate of yoga, pilates and massage therapy that he does with the Cavs and their support staff.

"I've been blessed with a lot of physical talent and a strong body," James said. "I have focused on working hard to maximize those gifts."

Posted by Philip Metres at 7:17 AM

"Yoga mad" - is that pacifist cousin of road rage?

I just started practicing yoga this year, so I don't think I qualify yet. But I am definitely it.

oh yes, yoga mad. or obsessed. or existing in symbiosis with it. I've been doing ashtanga now for 10years or so, & though it's been great for providing health & confidence & sheer strength to carry around a 28-pound wriggling toddler, I can't say it's helped me much in writing poetry--after lots of trying, I do have two decent poems that express a sort of yogi perspective. But are balance & detachment the best qualities to use in writing a good poem?

I think I am a poet who might qualify as "yoga mad." It helps everything. Hope you are doing well. J. Ross