On the Shministim: Israel's Conscientious Objectors 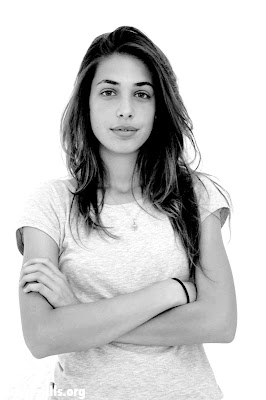 This Omer Goldman. Here's her story:

I first went to prison on September 23 and served 35 days. I am lucky, after 2 times in jail, I got a medical discharge, but I'm the only one. By the time you read this, many of my friends will be in prison too: in for three weeks, out for one, and then back in, over and over, until they are 21. The reason? We refuse to do military service for the Israeli army because of the occupation.

I grew up with the army. My father was deputy head of Mossad and I saw my sister, who is eight years older than me, do her military service. As a young girl, I wanted to be a soldier. The military was such a part of my life that I never even questioned it.

Earlier this year, I went to a peace demonstration in Palestine. I had always been told that the Israeli army was there to defend me, but during that demonstration Israeli soldiers opened fire on me and my friends with rubber bullets and tear-gas grenades. I was shocked and scared. I saw the truth. I saw the reality. I saw for the first time that the most dangerous thing in Palestine is the Israeli soldiers, the very people who are supposed to be on my side.

When I came back to Israel, I knew I had changed. And so, I have joined with a number of other young people who are refusing to serve - they call us the Shministim. On December 18th, we are holding a Day of Action in Israel, and we are determined to show Israelis and the world that there is wide support for stopping a culture of war. Will you join us? Please, just sign a letter. That's all it takes.