On Rain and Embers: A Conversation between Philip Metres and Ali Nuri

I'm delighted to introduce poet Ali Nuri, an Iraqi American who fled Iraq when he was just seven years old, in 1994, in the post-Gulf War violence and punishment meted out by the regime of Saddam Hussein. His family's long journey of exile brought them from refugee camps to the United States, where they made a new life. His first book of poems offers a window into the challenges and wonders of a life lived on two continents, in two tongues. Poems from the book are interspersed through the interview below. For more information about Ali Nuri, please visit his website. 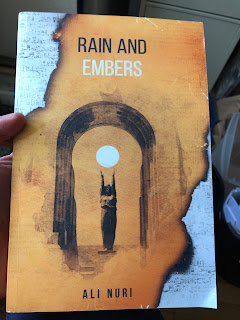 On Rain and Embers: A Conversation between Philip Metres and Ali Nuri

Philip Metres (PM): Ali, I just finished Rain and Embers (2019). The book really seems to be a memoir- in-verse exploring the inner life of a refugee--from someone struggling with displacement and loss, to longing for love and home. I’m wondering if you might share a little about your journey into poetry. Did you get any encouragement from your teachers along the way?

Ali Nuri (AN): Though I spoke Arabic (the southern Iraqi dialect) growing up, I was really a child without language. I remember my first teacher in the camps who beat me for not being able to read the Quran; I tried to memorize it to stop the punishment, but they caught on quickly. The teachers after that didn't expect much from me, especially my English teachers. My family was granted asylum in 1994, when I was 7 years old. I was immediately placed in second grade, but unfortunately, the public schools I attend from that age on were and still are in poor condition. ESL classes were useless to me—as was most education—due to dyslexia. Despite having good intentions, my teachers were overworked, underpaid, and lacked the resources to run a class of regular students efficiently. I remember one telling me that it was okay to be an average student because it's not as if I was going to be a writer one day. Language has always fascinated me, though—probably because of the alienating experiences I've had with it and not in spite of them. 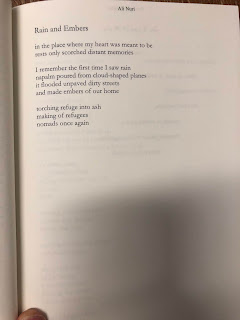 PM: Ali, what memories do you carry with you about your time as a refugee? What do you hope that you won’t forget, and what do you wish you could forget but can’t? What do you think Americans should know about refugee experience that they might not?

AN: Beyond the visual memories of surviving in the most inhospitable place on Earth, the overwhelming feeling I recall having was fear. As a child refugee, it was difficult to process the events that had led to my exile as much as what was happening right in front of me. One day I had been sitting under the shade of the fig trees on my grandmother’s small farm; the next, my family was walking silently across the desert with guns often pointed in our direction, en route to an enclosed encampment full of ragged tents where necessities like water and food were rationed under armed guard who were not afraid to “maintain order” using brute force. I hope to not forget the sense of community we somehow salvaged there, how people could still stand up for one another and protest mistreatment by the guards even when they had nothing left to gain and everything left to lose.

I wish I could forget the violence exerted on us, the humiliation, the intimidation, the intolerance. There was so much of it, more than I could ever possibly fathom, even now. How can a child understand that, let alone a stoic adult? You see the violence right in front of you, but it remains unprocessable, swelling like a tumor in your brain that can never be excised but only conceded to. You just internalize that fear and operate on survival mode. Your hierarchy of needs is dismantled for you from the outside, and the inside is so barricaded that your own needs become irrelevant. You are alien to yourself. One day, you leave the cage, but you are still an alien in a different land where you are told that life, liberty, and the pursuit of happiness are inalienable to you. In practice, you come to find that such rights are flexible and those in power continue to hold all control, a mere degree or two removed from the tyranny you’ve always known.

That sums up my experience of being a refugee and its lasting effects, and I think every American should be made aware of that. Refugees do not seek refuge from a stable, secure life; we are escaping horrors the American people cannot imagine and seek to live peaceably, extolling the same foundational virtues about the elusive, sacred freedom that every human being deserves. Despite the surface-level differences, at our most unshakable core, we desire the same beautiful, happy, fulfilled world. 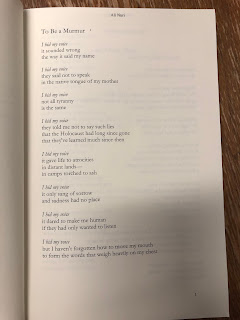 PM: Did you take creative writing courses in high school or college? Why did you choose poetry as opposed to some other literary genre?

AN: No, I’ve never taken creative writing classes, but I jumped at the opportunity to take a basic poetry analysis course in college as part of my general education requirements. In high school, my teachers had low expectations of students; one spent an entire year just covering material on To Kill a Mockingbird. Despite the lackluster way in which I was introduced to the written language, I had a certain insatiable curiosity about its power—a power to express with complete abandon, to disarm, to draw out our monstrosities and most vulnerable dimensions and realize they are one and the same.

What first drew me towards poetry was that it felt alien like me. People often comment to me that they feel alienated by poetry rather than intrigued when presented with someone else’s mind puzzle, but that initial alienation was what pulled me into its orbit. I have this perilous need to deconstruct and decrypt language, to find the patterns and strip them bare, discretely categorizing all of that particulate matter while appreciating its psychological innards. Occasionally that effort proves fruitless, but sometimes I read someone else’s poem and it feels like the words are my very own skin reaching to embrace my body from a page. Most forms of writing (especially novels and short stories) focus solely on structure, character, plot, pacing; while some liberties can be taken, the results are often rigid and formulaic. Most play it safe.

Poetry, to me, has a degree of sensuality that shouldn’t be overlooked, taking a no holds barred approach in its expression. It incorporates all of those ingredients found elsewhere in literature without the same social and emotional constraints; there’s room to be abstract, to circumvent form within form. There was an element of limitlessness that drew me in. Words and their negative spaces hold an immense weight, and with poetry, it’s entirely about the words themselves—the way they sound, their arrangement, their utility, their tone. Brevity, when done well, contains an entire world unto itself. A single phrase can carry an almost repulsive danger and a swift softness. Nothing is more rewarding than chipping away at that impossible mind block to find the poem buried in its impossible grains.

PM: Were you happy with how the book was received?

AN: When it was just about writing and putting my thoughts to paper, I was satisfied. I thought I was fulfilling a life purpose, one that had been calling to me like a siren from the depths for years, one I had ignored over and over again to “become” the person society urged me to become.

In the background, there were always words waiting to be written while I was busying myself with trying to become a more acceptable adult. After the poems were finally written and assembled, I became obsessive about perfecting the basic components of a collection—at one point, I spent 3 weeks locked in one of my rooms with a printer from 8 a.m. to 8 p.m. going over font sizes and shapes, comparing every single letter, until I found the one I wanted to use. For me, it was important that the cover matched the writing and conveyed the message I wanted it to convey. In the end, the book was received reasonably well and garnered more attention than my inner critic had been expecting, but that level of perfectionism can become a double-edged sword, leading to constant overthinking and second-guessing. It’s crucial to remind myself that no work is ever truly finished; mistakes are always made in retrospect, but the only way to move is forward. Recognizing the things we would do differently is a sign of growth and dynamic maturity. 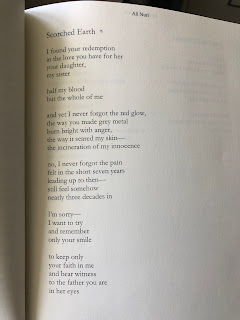 Posted by Philip Metres at 5:25 PM