“The Iraqis are going to wake up in the morning and nobody will be there,” said a soldier who only identified himself as Specialist Joseph.  (from the New York Times).

And nobody, more or less.  Since there is certain to be U.S. presence in the form of security contractors and the whole apparatus of supplementary security.

So I guess the war's over, nine years later, and many years after President Bush stood under "Mission Accomplished" banner on an aircraft carrier--the ultimate pie in the sky sold to the public, one news bite at a time.

Was it worth it? 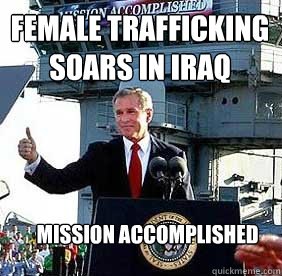 The war cost nearly 4,500 American and well more than 100,000 Iraqi lives and $800 billion from the U.S. Treasury. The question of whether it was worth it all - or whether the new government the Americans leave behind will remain a steadfast U.S. ally - is yet unanswered.


If you can't answer the question when the costs have been so great, and the reasons for war so flimsy, so nakedly imperial, the answer isn't one that any of us is going to like.

Time to count the cost.

Posted by Philip Metres at 1:22 PM