"A TREATISE ON POWER (IN 32 STROKES)" by Wayne Miller 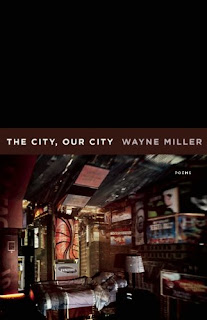 Wayne Miller's new book, The City, Our City, is at once a meditation on The City itself as a human production, a mythic fable of City, and a secret autobiography of a denizen of certain cities; living in a city becomes an extension of ourselves, the way the cover image does, a picture ostensibly of an urban bedroom, when turned upside-down, becomes a massive city block.  One of my favorite poems from the collection is "A Treatise on Power (In 32 Strokes)" for its taut epigrammatic explorations of power, how it lights and blinds, how it leads and lures us.

A TREATISE ON POWER (IN 32 STROKES) by Wayne Miller

(1) Even a leaf presses its weight against the table.

(2) In fog, the brighter the lights, the worse the driver’s blinded.

(3) How traffic makes way for the flashing ambulance,

(4) then jostles to ride the wake of its passage.

(6) And they who lay down in the fields
to be shot—who’s cushioned by their ghosts? Now

(7) the fan in the window is turned by the wind;

(9) Let’s burn the leaders in effigy;
let’s beg for their return.

(From what space is the wind so endlessly hollowed?)

(12) In the abandoned government building,
papers covered the floor like spent lottery tickets.

(13) How quickly we erase ourselves—

(14) in favor of abstractions.

(15) And yet, people can become so cramped
pressed up inside their words—.

(16) (And when they recede into their silences, sometimes
the words remain.)

(17) Observe you father
bend to kiss the wealth on a bishop’s finger.

(18) Beyond the fence, a police helicopter
pinned to the ground by its spotlight—

(19) and by whomever the spotlight is trained upon.

(22) It’s impossible to enter a lake without chaosing the surface,

(23) and thus, how close yellowcake comes to being
the most beautiful word in the English language.

(25) watch as a finely dressed woman gets her luggage
stuck in a revolving door.


(26) There’s no better time for the bellhops
to take their smoke break.

(27) Without power, we’d be stuck in this elevator.

(28) Without power, the world’s submarines would sink silently
to the abyssal plain.

(30) every direction meets in the compass rose of a body.

Lovely fractured and at the same time completely WHOLE poem.

This poem's fractured nature makes it WHOLE in so many fascinating ways.Thank you!