The Ghost of Tom McGrath at Occupy Wall Street 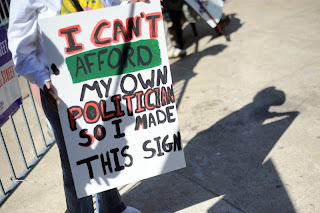 I've been reading and seeing the some great signage at the Occupy Wall Street protests, and thinking of Tom McGrath, who called for "tactical poetry" as one mode of poetic intervention into the political life.  The level of humor, self-referentiality, and acid critique--all at once, sometimes--would have made McGrath and the poets of protest from our tradition--the Fugs, IWW Song Book, and on and on--pretty pleased. 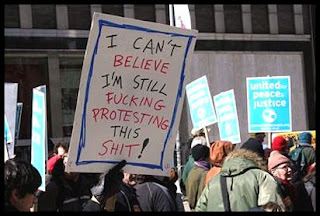 It's not a replacement for "strategic poetry," poetry built for the ages, but rather a kind of poetry for the immediate, for "thinking with things as they exist" (Zukofsky), rather than endlessly waiting for recollection in tranquility (Wordsworth):


McGrath: One is the kind of poetry that might be called tactical, about some immediate thing: a strike, let's say; some immediate event. The poet should give it as much clarity and strength as he can give it without falling into political slogans, clichés and so on. I also thought we needed another kind of poetry that is not keyed necessarily to immediate events, a poetry in which the writer trusts himself enough to write about whatever comes along, with the assumption that what he is doing will be, in the long run, useful, consciousness raising or enriching. A strategic poetry, let's say. There have been a lot of tactical poems directed to particular things, and those poems now are good in a certain sort of way, but the events they were about have moved out from under them, Somebody asked Engels, "What happened to all the revolutionary poetry of 1848?" He replied: "It died with the political prejudices of the time." That is bound to be the fate of a lot of tactical poetry. But that's O.K. If we have to have somebody give us a guarantee that our work is going to last a thousand years before we'll be willing to write it, we may as well give up the ghost.

The Brecht song from the old Comintern: "And just because he's human,/ he doesn't want a pistol to his head./ He wants no servants under him/ and no boss over his head." That's as direct as you can make it, and it's got imagery to go with it... On the other hand we take a poem like Neruda's Canto General, a marvelous big poem, but it's not there to help in some immediate kind of situation; it's a strategic poem. But anyone who reads it will have his consciousness expanded by the reading of it... The ideal thing of course is to bring the tactical and the strategic together so that they would appear in this massive poem of pure lucidity, full of flying tigers and dedicated to the removal of man-eating spinning wheels from the heads of our native capitalists--absolute lucidity and purest, most marvelous bullshit. That's the poem I would like to have, because there's a place where those two are the same. That's in the archetypal heavens of course... I would like to put them together. We all would. 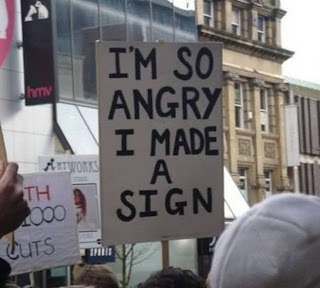 Great post. And great signs in the photos here.

There's a brief poem by Tom McGrath that I have in my cubicle at work. (I work in a large office in a large corporation, on a floor full of cubicles. The cubicles are gray, the windows are gray, the walls of the office are partly stark white and partly military green.)

Not sure how the lines might break here in the comment box; the poem is four lines.

Living on catastrophe, eating the pure light,
What have we come to but the mother dark?
Over our heads, obscurely, the stars work
Heedless. They did not invent the night.

In the online poetry magazine Pemmican is an essay by McGrath, "Problems of the Revolutionary Poet in Contemporary Times," here, in which he elaborates further on some of his ideas about poetry and politics and the connections between the two. The essay (or a version of it) also is in the North Dakota Quarterly issue you've cited in your post here; the NDQ issue was devoted in its entirety to the life and work of Tom McGrath.

Lyle, you're my go-to guy for all things McGrathian... I've been thinking also about how these signs are quite situationist, how they refuse to be limited to "issues," refuse transparency, and thus they act less as windows into the meaning of the protest and more as moveable walls for some kind of habitation...