The Perils of Drone Attacks, and Noor Behram's Documentary Photography 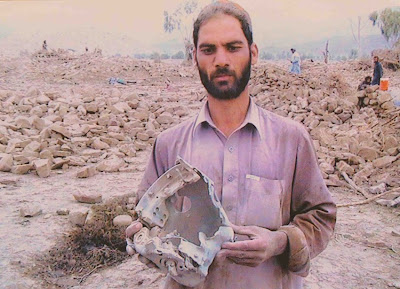 I've written elsewhere about the perils of drone attacks as war policy, and this recent article in the Guardian corroborates the collateral damage from drones is far worse than has been reported. Noor Behram is doing the documentary work that uncovers what governments would rather hide:

For the past three years, Noor Behram has hurried to the site of drone strikes in his native Waziristan. His purpose: to photograph and document the impact of missiles controlled by a joystick thousands of miles away, on US air force bases in Nevada and elsewhere. The drones are America's only weapon for hunting al-Qaida and the Taliban in what is supposed to be the most dangerous place in the world.

Sometimes arriving on the scene just minutes after the explosion, he first has to put his camera aside and start digging through the debris to see if there are any survivors. It's dangerous, unpleasant work. The drones frequently hit the same place again, a few minutes after the first strike, so looking for the injured is risky. There are other dangers too: militants and locals are suspicious of anyone with a camera. After all, it is a local network of spies working for the CIA that are directing the drone strikes.

But Noor Behram says his painstaking work has uncovered an important – and unreported – truth about the US drone campaign in Pakistan's tribal region: that far more civilians are being injured or dying than the Americans and Pakistanis admit. The world's media quickly reports on how many militants were killed in each strike. But reporters don't go to the spot, relying on unnamed Pakistani intelligence officials. Noor Behram believes you have to go to the spot to figure out whether those killed were really extremists or ordinary people living in Waziristan. And he's in no doubt.

The drone strikes are a secret programme run by the CIA to assassinate al-Qaida and Taliban extremists using remote, wild Waziristan as a refuge. The CIA does not comment on drones, but privately claims civilian casualties are rare.

The Guardian was unable to independently verify the photographs. Noor Behram's account of taking the pictures appeared detailed and consistent however. Other anecdotal evidence from Waziristan is conflicting: some insist the drones are accurate, while others strongly disagree.

According to Noor Behram, the strikes not only kill the innocent but injure untold numbers and radicalise the population. "There are just pieces of flesh lying around after a strike. You can't find bodies. So the locals pick up the flesh and curse America. They say that America is killing us inside our own country, inside our own homes, and only because we are Muslims.

"The youth in the area surrounding a strike gets crazed. Hatred builds up inside those who have seen a drone attack. The Americans think it is working, but the damage they're doing is far greater."

Even when the drones hit the right compound, the force of the blast is such that neighbours' houses, often made of baked mud, are also demolished, crushing those inside, said Noor Behram. One of the photographs shows a tangle of debris he said were the remains of five houses blitzed together.

The photographs make for difficult viewing and leave no doubt about the destructive power of the Hellfire missiles unleashed: a boy with the top of his head missing, a severed hand, flattened houses, the parents of children killed in a strike. The chassis is all that remains of a car in one photo, another shows the funeral of a seven-year-old child. There are pictures, too, of the cheap rubber flip-flops worn by children and adults, which often survive: signs that life once existed there. A 10-year-old boy's body, prepared for burial, shows lipstick on him and flowers in his hair – a mother's last loving touch.

There are photos of burned and battered Qur'ans – but no pictures of women: the conservative culture in Waziristan will not allow Noor Behram to photograph the women, even dead and dismembered. So he makes do with documenting shredded pieces of women's clothing.

The jagged terrain, the often isolated location of strikes, curfews and the presence of Taliban, all mean that it is a major challenge to get to the site of a drone strike. Noor Behram has managed to reach 60, in both North and South Waziristan, in which he estimates more than 600 people were killed. An exhibition of his work, at London's Beaconsfield gallery opening on Tuesday, features pictures from 27 different drone strikes. Clive Stafford Smith, head of Reprieve, the campaigning group, has launched a lawsuit along with a Pakistani lawyer, Shahzad Akbar, seeking to bring to justice those responsible for civilian deaths from drones. "I think these pictures are deeply important evidence," said Stafford Smith. "They put a human face [on the drone strike campaign] that is in marked contrast to what the US is suggesting its operators in Nevada and elsewhere are doing. "They show the reality of ordinary people being killed and losing their homes, not senior al-Qaida members."
[...]

Posted by Philip Metres at 6:50 AM

Please find below, a link to a Protest Song that we have just completed.
Our thanks to all those who have helped with this project.
Please send this link to anyone who you think may be interested.
Apologies to anyone who has received this from an unknown party.
Kind regards,
Garth O'Donnell

'Drone Pilot', is a protest song.
All over the world drone planes are being flown, by 'X-Box Generation' men.
These heavily armed planes are remotely controlled, using satellite communications, by pilots often located thousands of miles away from their targets.
To date, thousands of civilian lives have been lost as 'collateral damage'.
There is very little media coverage of these pilotless planes.
This song is about the horrifying reality of modern war.