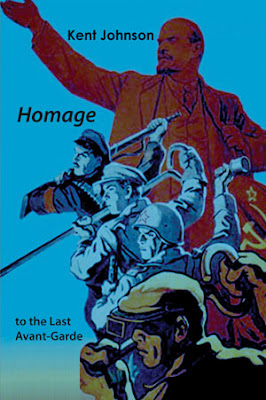 To purchase Homage to the Last Avant-Garde.

Kent Johnson's Homage to the Last Avant-Garde, a full-length poetry collection that gathers work from previous chapbooks such as the excoriating Lyric Poetry After Auschwitz, extends Johnson's ongoing parodic provocation of (and through) poetry. Organized in packets of "submissions" to various journals with experimental reputations, beginning with the experimental Evergreen Review (where Allen Ginsberg's "Howl" first appeared in the 1950s) to The World, the book is a subversive talkback to various generations of the avant-garde, and moves in ways that feel both admiring and admonitory.

It's that ambivalence toward the self-appointed avant-garde--and the ways it seems to fall short of its admirable aims to narrow the gap between art and life, to engage in art as social change, to innovate in ways that make revolution possible--that drives Johnson's project.

I've already reviewed Lyric Poetry After Auschwitz for Pleiades, and demonstrated how Johnson's chapbook provokes in a specifically political way. That review begins:

Lyric Poetry After Auschwitz is, unquestionably, a provocation; after all, the title glosses Adorno’s famous dictum about the impossibility of poetry after the Holocaust, and the front cover reproduces the contours of the infamous Abu Ghraib photograph showing Lynndie England holding a prostrate man by a leash, framed by cupids flying about, arrows loosed. Implicitly, the imagery conflates the Auschwitz and Abu Ghraib, and sets in motion a series of further provocations—not only regarding the seriousness of the Abu Ghraib scandal and the ongoing nastiness of the Iraq War, but about poetry’s role in light of such war crimes.

Of course, Johnson is no stranger to provocation, being the motive force behind one of the great contemporary literary hoaxes—that of the Hiroshima poet, Araki Yasusada, whose poems received wide acclaim and were published in esteemed poetry journals in the mid-1990s until it became clear that Yasusada was likely a fiction. Johnson was widely lambasted, and the poetry world did not entirely face its own complicity in holding ages-old doxa about authenticity and authorship.

This work, a chapbook, is a protest against the Iraq War, but it is also, as the subtitle suggests, a “submission” to the war. It is also a protest against, and submission to, poetry itself, in echoing a second meaning of submission. It is poetry with the bow pointed into its mouth, a crying in as much as a crying out.

Johnson has become, with all his work, from the Yasusada and Greek "translations" to his "own" "original" poems, perhaps our preeminent parodist. When his poetry works--and it does more often than it fails--it acts as a cauterizing burn, painfully staunching our wounds. The few moments where Johnson falters, as far as I can tell, are when he seems to stop believing in his own scary abilities to throw his voice into any poetic medium, grows self-conscious and then winks, thus betraying that longing (fairly universal to us poets) to be admired by one's contemporaries.

Johnson is at his best when he makes us most uncomfortable, when he exposes the rules of the game by playing it so well (cf. Zizek on resistance through precise obedience to the letter of the Law) that he reveals the game's own cynicism.

Dear Kent Johnson, thanks for the discomfort. I've never been good at swallowing bombs.
Posted by Philip Metres at 2:29 PM

Thanks for this terrific review!