Thoughts on the Poet Laureateship and Charles Simic's Tenure 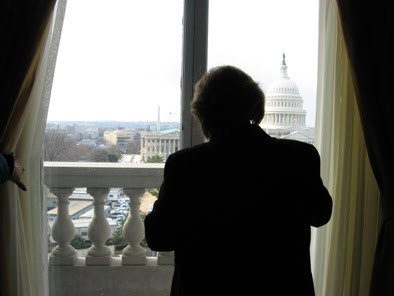 I recently read an interview with Charles Simic, the outgoing Poet Laureate, and it was probably the first thing I'd read or heard of his tenure. After one year, the 70-year-old Simic decided to step down:

Simic, who succeeded Donald Hall, another New Hampshire poet, said the job required far more work than he expected. He traveled so much, attended to so many duties and performed at so many events that he went the entire year without writing a new poem.

Especially for a prolific poet like Simic, this is a serious flaw in a job, no matter how much fame and money come with it. The poet laureate is paid $35,000 and has a modest travel budget, but he or she is also in demand for paid readings.

"One year is enough," said Simic. "Washington is too far, and the travel these days is no fun."

I happen to like Charles Simic's work, and he seems to be a charming fellow. Once at a reading in a classroom at Indiana University, Simic pointed to an obscure mathematical equation still scrawled on the board behind him, and said, "that should pretty much explain everything."

His own poems and his work in translation, were certainly worthy of the award (though I've always disliked his dismissiveness toward experimental poets like Jackson Mac Low and John Cage, to whom he is at least partially indebted for his own employment of chance operations). The fact that he was unapologetic about his political distaste for the Commander-in-Chief makes me admire him, particularly when one gets invited to the White House as PL:

Simic's feeling for Bush is not the typical snub of a liberal academic of his generation. Simic began life in Belgrade, Yugoslavia, on the eve of World War II, and his earliest memories are of what bombs do to a city. A series of poems in his most recent book catalogues horrors of war, some witnessed, some imagined. One begins:

The president smiles to himself; he loves war
And another one is coming soon.
Each day we can feel the merriment mount
In government offices and TV studios
As our bombers fly off to distant countries.

Yet, somehow, this article seems to want us to feel sorry for the guy. ONLY $35,000 a year, a MODEST travel budget. Poor fellow! The article fails to mention that the Poet Laureateship enables a poet to charge upwards of $10,000-$15,000 per reading. No one should ever feel sorry for a poet laureate, nor should we feel that they are being underpaid.

I do feel a little sorry that he didn't write anything new, but taking a year off from writing new work is not always a terrible thing.

We learn in the next paragraph, however, that he didn't even take a leave from his normal teaching duties:

Beginning last fall, he made nine trips to Washington. He did dozens of interviews with newspapers and electronic media, arranged readings and a poetry fellowship and answered hundreds of letters and e-mails. He went to New York each week to teach a course at Baruch College and read at other colleges in the East, Midwest and California. "I was like a traveling salesman," he said.

And as for the "dozens" of interviews, I recognize in "dozens" the hyperbolic vagary that I sometimes shamefully employ to mean, some number over 12.

What if the Library of Congress were to choose a mid-career civically-engaged (if not politically-engaged) poet for whom such duties are not perceived as a devil's bargain, but a tremendous boon, for which any number of younger, hungrier, poets would happily work? When I think back on the highest-profile tenures of Poets Laureate, the following come to my mind: Rita Dove, Robert Hass, and Robert Pinsky--all mid-career, civic-minded poets. Others (who shall "rename mainless") have gratefully received their laurels and did their duty and rode off into the sunset.

Perhaps I am trying to make something out of something that's meant to be a sinecure, rather than a site of real cultural engagement.
Posted by Philip Metres at 10:01 AM